A Celebration of Survivorship and the Northwestern Brain Tumor Institute

Share on Facebook Share on Twitter Share through Email Print
On Friday May 20, more than 450 friends, supporters, and community members came together for the seventh annual Minds Matter Benefit to celebrate the Northwestern Brain Tumor Institute (NBTI) year of accomplishments. The NBTI is at the vanguard of overcoming the discouraging odds faced by so many who encounter brain and spinal cord tumors. Philanthropic support is integral to the institute's success and inspires all involved to remain focused on the goal of eradicating brain and spinal cancer. This year's benefit raised over $610,000 in net revenue through ticket purchases, a live auction, and a paddle raiser during the event. 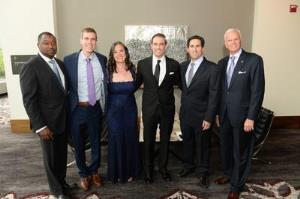 Co-chairs Mr. Bill and Mrs. Viviane Evanoff have been involved with Northwestern since 2003 when Bill was diagnosed with a brain tumor. Though he has progressed from a patient to a survivor, the couple continues to be active members of the NBTI: "Northwestern truly has become a second home for us," said Mrs. Evanoff. "We continue to meet with and benefit from amazing doctors, nurses, social workers, researchers, support staff, and fellow patients."

"While Viviane and I are the co-chairs of this year’s benefit, this event has never been solely about the people standing on stage," said Mr. Evanoff. "Minds Matter has always been a celebration of all of the people in this room: the patients and the survivors, their families and friends who support them every day, and the remarkable team of doctors, nurses, and researchers who strive every day to improve our lives and find a cure."

Among those doctors who the Evanoffs met along their journey are NBTI co-directors James P. Chandler, MD, Lavin/Fates Professor of Neurological Surgery, and Jeffrey J. Raizer, MD, professor of Neurology and Hematology/Oncology. Dr. Raizer echoed Mr. Evanoff's remarks as he recognized the efforts of all those involved with the NBTI, saying: "The whole is greater than the sum of its parts; the whole is the NBTI, which works not just because of what we do as individuals, but what we do as a team."

The NBTI is a nationally recognized leader in the fight against brain and spinal cord tumors, offering patients the most advanced clinical trial and treatment options available. With the ability to call upon the world-class resources of the Robert H. Lurie Comprehensive Cancer Center of Northwestern University and Northwestern Medicine, the NBTI is able to provide patients with the best possible treatment and support for their specific needs.

"We are one of the top programs in the country with over $40 million in National Institutes of Health funding," said Dr. Chandler. Dr. Chandler and his team are pioneering the use of a mini-microscope that offers improved mobility and 3-D visibility. He also is the first neurosurgeon to use a 3-D version of an endoscope, which significantly improves depth perception.

Dr. Raizer also described the work of Maciej S. Lesniak, MD, who was named chair of the Department of Neurological Surgery at Northwestern in 2015. Dr. Lesniak, who also serves as the Michael J. Marchese Professor of Neurosurgery, has been investigating what makes brain tumors immunosuppressant and why the immune system is weak in the context of brain tumors. He describes immunotherapy as one of the major areas where new discoveries are improving outcomes in other areas of oncology and will likely in brain tumors also.

The battle against brain and spinal cord tumors is ongoing, but thanks to physicians and scientists like Drs. Chandler and Raizer, as well as people like the Evanoffs and myriad other individuals and organizations who support the NBTI and Northwestern Medicine, tremendous progress is being made. "Together, we will continue to develop ways to improve the lives of brain tumor patients and, ultimately, find a cure," shared Mr. Evanoff in closing.