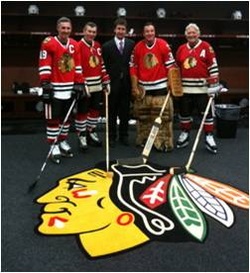 That’s what Michael Terry, MD, associate professor in orthopaedic surgery, considers a hockey game. As the season begins January 19, the team physician for the NHL’s Chicago Blackhawks will watch each moment of the 2013 campaign pass with unique perspective. For him, the action may follow predictable patterns, but the injuries do not.

“There are times where you are really busy and things become emergent because somebody is bleeding or unconscious, and then there are times when I can just watch the game and enjoy it,” said Terry, who has been with the team since 2005. “The likelihood of injuries can depend on a lot of things, but most of the time you really can’t foresee when you’re going to be needed.”

Each season, Terry begins his routine anew. He’ll repeat it dozens of times. Arriving two hours before the start of each game, his primary responsibilities include assessing players and determining who is medically cleared to take to the ice. From there he manages a multitude of chronic injuries, before turning his attention to those players forced out of action for extended periods of time.

As the team skates through each of three 20-minute periods, Terry stands at the ready, a position he didn’t imagine being in after graduating from the University of Illinois with a degree in mechanical engineering. 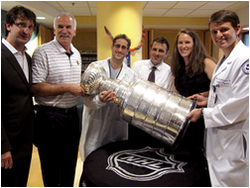 “When I grew up, I wasn’t really sure what I wanted to be down the road, and when I went off to college, I was planning on being an engineer.” Terry said.  “What really drove me to sports medicine was the type of surgery. I found Arthroscopy to be very precise and challenging.”

As Terry’s interests evolved – from mechanical engineering, to bio-engineering, to medical school, to orthopaedics – his enjoyment in the variety of tasks associated with sports medicine was realized. Today, he not only does works as a team physician, but also as a clinical practitioner.

“It’s one of those unique fields where you get to take care of people of all ages and with very different types of injuries,” he said. “I find myself doing hip surgery on a 60 year old one day and a knee procedure on a teenager the next.”

After attending University of Chicago Pritzker School of Medicine, Terry completed his residency at Cornell's prestigious Hospital for Special Surgery. He then took a sports medicine fellowship at the Steadman Hawkins Clinic in Colorado.

Learn more about Dr. Terry's work with the Blackhawks and his clinical work in sports medicine.