Share on Facebook Share on Twitter Share through Email Print
Aiden and Connor Hulett, of Batavia, like to celebrate their summer birthdays together. But this year Connor wanted to do something extra special for his 9th birthday. He suggested to his big brother Aiden, who was turning 11, that they raise money to help other children. Aiden enthusiastically agreed and the two started bouncing around ideas.

Their dad, Kevin Hulett, MD, an otolaryngologist, offered a solution both sons could agree on. They contacted Northwestern Medicine Central DuPage Hospital in Winfield, Ill. to see what young patients needed most. The answer surprised them – iPads.

“The iPads are excellent for education and distraction therapy,” said Ginger Manzella, a Child Life Specialist at Northwestern Medicine Central DuPage Hospital. “We are able to teach our young patients about their conditions and upcoming procedures using educational applications. Plus, the iPads can be a great diversion during procedures.”

In lieu of presents, Aiden and Connor asked friends and family attending their summer birthday party to donate cash instead. They raised $2,000, enough for four new 128GB iPads.

“Among the crisp new bills, many of their friends donated crumpled up dollars that we assume came from their own piggy banks. That was so heartwarming,” said Katie Hulett, Aiden and Connor’s mom.

The boys presented the $2,000 in cash to Northwestern Medicine Vice President of Operations Angela Black, and Inpatient Pediatrics Clinical Director Susan Fischer, while their little sisters Ava and Clara took their turns testing out the iPads.

Connor, a student at Vanguard Gifted Academy, and Aiden, who attends Rotolo Middle School, were modest when asked about their generous gift. Playfully jabbing at each other, both were reluctant to take too much credit. They both agreed it was a “nice thing to do.” 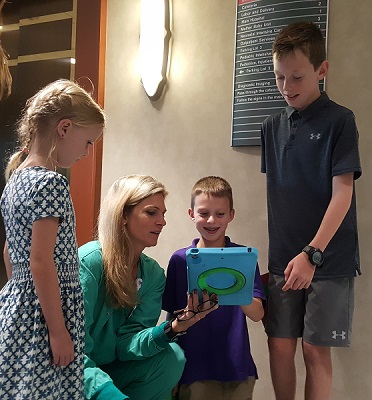