Share on Facebook Share on Twitter Share through Email Print
Christine Kump, 34, was eight weeks pregnant when she received a terrifying diagnosis: She had breast cancer. She started chemotherapy in February 2021 during her second trimester. Then her daughter made an early debut — 11 weeks ahead of her due date.

“My first thought [when I was diagnosed] was that I needed to start writing milestone letters to my 3-year-old daughter,” she says. “I just went deep and dark right off the bat, and I questioned whether or not I could continue with my pregnancy and how it would affect the baby if I could.”

Now the mother of two, Christine went through in vitro fertilization for both of her pregnancies, and she could not bear the thought of losing her baby. Once she met with physicians, she was relieved to learn she had treatment options that would not impact her unborn baby or her pregnancy.

“I’m a teacher, and so I plan things,” she explains. “From a mental health aspect, I felt a lot better once my treatment actually started because it felt like I was chipping away at it.”

Administering chemotherapy to patients who are pregnant does not happen often. Studies suggest that a breast cancer diagnosis occurs in approximately one of every 3,000 pregnancies. While there are some limitations to treating cancer during pregnancy, patients can receive chemotherapy starting in the second trimester.

“For chemotherapy, there are certain medications that can be used during pregnancy during the second and third trimesters,” says Dragana Tomic, MD, medical oncologist at Northwestern Medicine Cancer Center Warrenville. “We do not offer treatment during the first trimester because that’s when the organs of a baby are formed. There are also certain medications that we avoid during pregnancy to ensure treatment is safe for both mom and baby.”

Although the thought of going through chemotherapy while pregnant is daunting, both Christine and Dr. Tomic knew it was necessary.

“Opting to not do treatment and letting the cancer grow for nine months during pregnancy will not produce a good outcome,” Dr. Tomic says. “Christine was very brave. She is a strong woman and has excellent family support. We were there to support her through her journey.”

Typically, patients receive supportive medications to help with nausea and white blood cell count. But those medications can’t be administered during pregnancy, so Christine underwent chemotherapy once every three weeks instead of every two weeks. This gave her body more time to recover and replenish her white blood cells. In total, she received four treatments of adriamycin and cytoxan (AC).

“The first week after chemo treatments, I felt a lot more fatigue and overall didn’t feel well,” Christine says. “During the second and third weeks, I felt pretty good, so I did have some time to enjoy being pregnant.”

After completing the AC chemotherapy, Christine waited three weeks and then began weekly chemotherapy with a different medication: paclitaxel. Two days after her fourth paclitaxel treatment, her water broke. She was only 29 weeks pregnant.

Christine received medication to stop the labor, which worked for three days. Then, on May 30, Christine and her husband Matt met their baby girl, Vivian.

“I always loved the name, and then I learned it means, ‘alive,’” Christine says. “I felt that it was so fitting after she went through chemo with me.”

Initially, Christine worried that the chemotherapy played a role in Vivian’s premature birth, but her oncology team reassured her that was not the case. Born at 2 pounds, 10 ounces, Vivian had a fair amount of growing to do before she could go home. Christine and Matt knew their daughter was in good hands with the NICU staff.

“The survival rate for infants born at 29 weeks in our NICU is quite good at 96%,” says Jeffrey L. Loughead, MD, medical director of Pediatrics at Ann & Robert H. Lurie Children’s Hospital of Chicago at Northwestern Medicine Central DuPage Hospital and Northwestern Medicine Delnor Hospital. “This is likely much better than most would suspect for someone born 11 weeks early.”

According to Dr. Loughead, Vivian had no abnormalities associated with Christine’s chemotherapy and was treated for typical issues that affect preterm infants. She was intubated for about a week to support her immature lungs, provided nutritional support through IV and tube feedings, and treated for jaundice, electrolyte disturbances, apnea and transient cardiac changes.

For parents, having a baby in the NICU can be difficult emotionally. They often have concerns about their child’s well-being as they are grieving the loss of the expected post-delivery experience they’d been anticipating for months. Dr. Loughead says the nurses and medical team are well aware of these concerns and address them directly. For example, the staff understands it can be difficult for parents to fully process details, so they repeat information often to help them grasp it all.

“We also try to get the parents involved early in the child’s care to restore some sense of their parentage and not leave them as bystanders in their baby’s care,” Dr. Loughead explains.

Over the course of Vivian’s stay, Christine and Matt were able to bottle feed and bathe Vivian.

“When you see her struggling, it’s so hard, and you’re just trusting what the nurses and doctors say,” Christine says. “Once Vivian started getting stronger, it was a lot more comforting.”

One Foot in Front of the Other

Following her cancer diagnosis, Christine was not able to do a breast MRI, CT scan or a bone scan because the dyes used are not safe during pregnancy. A week after Vivian was born, her oncologist ordered a CT to check on the status of the tumor in her breast.

“The good news was there was no evidence of disease spread,” she says. “The tumor had gotten smaller, but not as small as they’d hoped.”

One week later, Christine was able to restart her chemotherapy treatments. This time, she would receive carboplatin, a chemotherapy medication that she could not receive during pregnancy. She continued these treatments once a week for eight weeks with her last dose on August 3.

“I like to have checklists, and it was nice to check off every treatment,” she says. “I grew up playing sports and running and am used to working toward a certain goal. My dad’s coaching cue was, ‘Just keep putting one foot in front of the other,’ and that’s what I’m doing every day.”

Although there are some big questions ahead of her, Christine remains optimistic.

“Some say the survivor stage is harder than the survival phase, because there’s an unknown after treatment,” she notes. “I can’t live like that. I’m going to enjoy my healthy days, and I’m not going to let the thought of cancer take over my mindset because I have two beautiful girls and an amazing husband, and I want to be around for them.”

Making a Decision for the Future

When Christine learned she had breast cancer, she went through genetic testing and tested positive for the BRCA1 mutation. People with this genetic mutation carry a much higher risk of developing breast cancer or ovarian cancer. As a preventive measure, Christine chose to have a bilateral mastectomy, which is the surgical removal of both breasts.

Christine met with Mary Ahn, MD, breast surgeon at Northwestern Medicine. Since Christine already had an active cancer, the primary focus was to treat her cancer first.

"With an active cancer, you have to make sure you’re taking care of the cancer properly, and the genetic mutation becomes secondary,” Dr. Ahn says. “Once you’ve treated the cancer, we need to consider the appropriate surgery for treating the cancer and reducing risk of a second cancer. When you’re a young person, you have a significantly higher risk of second cancer occurring later on.”

In the early morning of her 35th birthday, Christine was wheeled into the operating room for her mastectomy. During that surgery, she also had tissue expanders put in place of the breast tissue to start the process of reconstruction.

Christine’s cancer journey is not yet finished. She will soon begin radiation to destroy any remaining cancer that might be in her body. It has been a long road, but her love for her family is what drives her to push through.

“I just want to be there for my family — for my husband and my daughters,” she says. “The thought of not being here to see my kids grow up is what keeps me going. I’m going to do everything I can to be there for my girls. I want to see those girls grow up.” 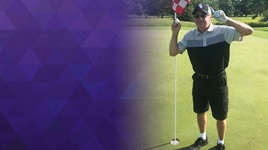 From a Rare Cancer to a Rare Hole-in-One: A Golfer’s Triumphant Return