Planning a wedding can be a rollercoaster of mixed emotions. Buying the perfect wedding dress, picking a venue and organizing the seating chart can be just a few of the tasks most soon-to-be brides encounter during the wedding planning process. For Elise Boni, who was 26 years old when she got engaged, being rushed to Northwestern Medicine’s emergency department was not on her to-do list.

“I was in the midst of wedding planning and in fact was about to send my deposit to the wedding venue when I suddenly caught pneumonia and was put on bed rest,” said Boni. “The next thing I remember I was waking up at the ICU with tubes and a ventilator hooked up to me.”

Boni, who lives in Chicago, was rushed to a local hospital after having a seizure the morning of December 4, 2015. After doing a CT scan and discovering that she was hemorrhaging in her brain, the medical staff at a local hospital quickly transferred her to the neurocritical care unit at Northwestern Memorial Hospital.

“When Elise was admitted to the hospital, she was in critical condition and wasn’t responding,” said Matthew B. Potts, MD, neurological surgeon at Northwestern Memorial Hospital and assistant professor in neurological surgery at Northwestern University’s Feinberg School of Medicine. “We had discovered that she had a blood clot on the main artery of her brain and knew her chances of survival were decreasing rapidly. We had to act fast.”

The blood clot, known as Cerebral Venous Thrombosis (CVT), is a rare form of stroke accounting for only one percent occurrences according to the American Heart Association/American Stroke Association. In Boni’s condition, doctors were concerned that the clot may cause permanent brain damage that could affect her motor skills forever.

“After about four minutes without blood and oxygen, brain cells can die quickly causing significant damage to the brains’ motor functions,” said Babak Jahromi, MD, neurological surgeon at Northwestern Memorial Hospital and professor of neurological surgery at Northwestern University’s Feinberg School of Medicine, who was also Boni’s neurosurgeon. “Due to the amount of time Elise was unconscious, we were worried that there would be severe damage on her brain impacting her speech and motor skills and that her ability to walk down the aisle was going to have to be put on hold.”

Her soon-to-be fiancé was by her bedside every single day hoping she would get better. As the week progressed, her prognosis was looking bleak and her brain was swelling so bad that neurosurgeons had to operate on her.

“We had to relieve the swelling by removing half of her skull allowing for her swollen brain to have a place to go,” said Potts. “It was a risky surgery considering the blood-thinners that she was on, but necessary for her to stay alive.” 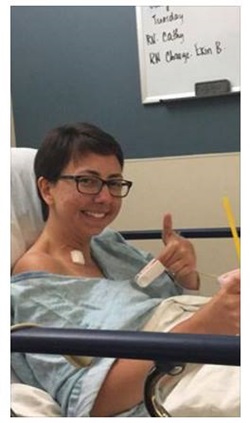 Almost three weeks after having her skull removed, Boni woke up from her coma and was ready to take on recovery.

“Rehabilitation was intense,” said Boni. “I had therapy every single day including physical therapy, speech therapy, occupational therapy, recreational therapy and walking group. I had to learn how to eat with my left hand because my right side wouldn’t move. Therapists would put objects in front of me like a paper clip and I would have a hard time grasping for the word. It was challenging, but I was determined.”

After hard-work and perseverance, Boni was able to complete her rehabilitation allowing for her to gain mobility and speech in a miraculous three weeks.

“We were all amazed at how fast she was recovering and the milestones she was making,” Jahromi said. “She is truly a fighter.”

The couple has already overcome so many hurdles before they’ve officially become Mr. and Mrs., but it’s made the couple stronger.

“Love can do remarkable things,” said Boni. “And with the drive to step out on my wedding day and walk towards my future husband, it was everything I needed to keep me moving forward during my recovery.”

Mr. and Mrs. Elise Forner said “I Do” on July 14, 2016 in front of a small group of family and friends. The newlyweds became the first couple to get married on the field at Illinois State University’s Hancock Stadium. The couple is looking forward to starting a new chapter in their life and Boni is eager to start teaching full-time again as a fifth grade teacher at Ardmore Elementary School in Villa Park, IL.