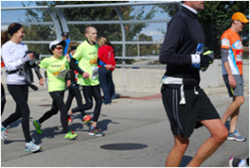 Inspired to make his running more meaningful, an interventional cardiology fellow from Northwestern led a blind runner through the Chicago marathon.

Mike Tempelhof, MD, has run several marathons and competed in Iron Man races. He has achieved personal goals and qualified for competitive marathons like the one in Boston. Some might even say the interventional cardiology fellow is a natural born runner.

A 49-year-old Toronto resident who lost her sight when she was in her 20s from retinitis pigmentosa, Jonas says Dr. Tempelhof “is a natural born guide.” 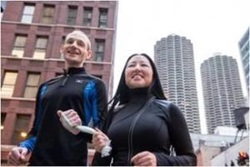 Dr. Tempelhof guided the now three-time marathoner through Sunday’s Bank of America Chicago Marathon, helping her to clock her best time at four hours and 22 minutes and qualify for the Boston Marathon. The accomplishment is significant for Jonas who just started running a couple of years ago after she was diagnosed with breast cancer. "I saw how close mortality can be and I decided I wanted to be as healthy as possible."

With a shoelace as a tether, Dr. Tempelhof helped Jonas manipulate her way through a crowded field of more than 37,000 runners, speeding up as other runners slowed at the end, shaving more than a half an hour off of the time of her last marathon, which she ran in Toronto. 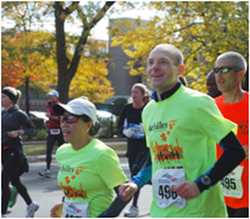 “Mike was just incredible. Not only was he a good guide, he was a good coach,” Jonas says. “I wanted to walk, but he wouldn’t let me. When I finally just stopped, he told me I had 10 seconds and he counted down.”

Dr. Tempelhof achieved his personal record in last year’s Chicago marathon, crossing the finish line in two hours and 50 minutes. It was then that he decided he wanted to run for more than just himself.

He saw participants last year running with Achilles International, a non-profit organization that assists athletes with disabilities in competing in events like the marathon. Dr. Tempelhof looked up the organization and found there was no Chicago chapter. He pushed the organization to start a chapter here so he could get involved and he then began running with local disabled vets, blind runners and others.

“For me, it’s an opportunity to take my talent of running and make it more meaningful,” he says. “To help someone else just meet a goal of running a marathon when they’re disabled seems more impactful and more important than setting a personal record.”

Achilles paired Dr. Tempelhof with Jonas for this year’s marathon, his first attempt at serving as a guide and her first time running in Chicago. Jonas talked to him on the phone in the weeks leading up to the marathon and knew she had found a compassionate guide. But, it was his drive that both surprised and inspired her.

“He was absolutely lovely and he doesn't give up. He comes across as very soft spoken, but get him in a race, and you see the true Mike,” Jonas says. “That’s the kind of doctor I would want—someone who is compassionate and tenacious. Northwestern should be proud to have such a great person and physician at the hospital.”

The two met in person a couple of days before the marathon. They took a few brief runs up and down the sidewalk in front of Jonas’ hotel to try running together with a tether and to practice switching quickly to an elbow grip for sharp turns.

“It’s hard to believe he had never been tethered before,” Jonas says. “His knowledge of the course was invaluable. He knew where every turn was, knew exactly what was coming up and was able to position me perfectly.”

For Dr. Tempelhof, the experience of being a guide was more rewarding than he imagined.

“It was a wonderful, inspiring experience. Every single step of her life needs to be guided by a dog or by another person,” he says. “To be with her and see the achievement of a marathon and her personal record was such an honor. It was a challenge to get her through 26 miles safely and that made it so much more meaningful.”

While he wasn’t sure what to expect going into the run, he now hopes it’s an experience he can repeat. “It’s no longer about chasing numbers for me. It’s about finding your talents and using them to help other people.”