Chairbound by Bone Spurs: Spine Surgery Helps Oswego Man Get Back on His Feet

Share on Facebook Share on Twitter Share through Email Print
People often associate bone spurs with knees and feet, but did you know bone spurs can also occur on the spine? Bone spurs, or osteophytes, are bony growths that often develop along joints as the body attempts to remodel bone and cartilage lost due to degeneration or arthritis.

“Not all bone spurs cause problems, but when they do the pain can be excruciating,” said Peter Lee, MD, a neurosurgeon at Northwestern Medicine Central DuPage Hospital and Northwestern Medicine Delnor Hospital. “The bony projections can narrow the spinal column causing compression on the nerves resulting in severe back and leg pain from spinal stenosis.” 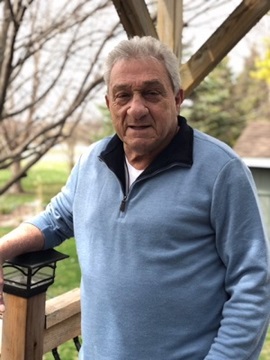 For some patients, like Jim Esposito, of Oswego, the pain is so intense it becomes debilitating. Over the last year, Esposito attempted to manage the pain with medications, steroid injections and physical therapy, but by December of 2017 the pain became so severe, he could barely walk.

“I felt helpless,” said Esposito. “I basically lived in my Lazy Boy 24 hours a day. I couldn’t even make it to my bed. I lost 27 pounds and was just wasting away.”

According to Dr. Lee, Esposito was a more unusual case. Often times, spinal stenosis affects one focal area in the spine. In cases where multiple levels are involved, it typically affects contiguous levels next to each other. Esposito had spinal stenosis in two distinct areas of the spine where bone spurs were compressing the nerves going to his legs. The solution -- a minimally invasive surgery to remove the bone spurs and take pressure off the nerves.

The surgery is completed through a tiny incision approximately 1 inch in length. Due to Esposito’s rare case, two incisions were made. With the use of a minimally invasive retractor, the muscles are gently pushed aside instead of cut. The bone spurs are then shaved away using specialized cutting tools and a diamond-head drill.

“It is a very delicate procedure as the spurs must be carefully dissected away from the nerves without injuring them,” said Dr. Lee. “By using advanced microsurgery tools and techniques, we’re able to minimize damage to soft tissue, decrease post-operative pain, and reduce scarring.”

Esposito was up and out of bed within hours of the surgery and returned home the next day. He continues to undergo physical therapy to build up his strength, and he is thrilled to be out of his Lazy Boy.

“I feel really good!” said Esposito. “After being cooped up for so long, I have cabin fever and am really looking forward to getting out more.”

Early spinal stenosis may have no symptoms. In most people, symptoms develop gradually over time. Symptoms may include, pain in the back; burning pain going into the buttocks and down into the legs; numbness, tingling, cramping, or weakness in the legs; loss of sensation in the feet; and foot drop, a weakness in a foot that causes the foot to slap down when walking.