Share on Facebook Share on Twitter Share through Email Print
When the sun sets on Chicago later tonight, two of its Park District’s icons will glow pink in support of the Lynn Sage Cancer Research Foundation’s (LSCRF) campaign to remind Chicagoans of the importance of regular mammograms, breast self-exams and the early detection of breast cancer. Soldier Field and Buckingham Fountain joins nearly 200 Chicago buildings and landmarks that will either illuminate pink or hang banners or flags during October, breast cancer awareness month. 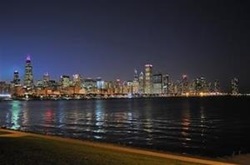 “Chicago is going pink this month for breast cancer awareness,” said Mayor Rahm Emanuel. “Breast cancer impacts so many of our lives and it is vital that women everywhere know that we stand with them in the fight against breast cancer. I thank Stephanie Lieber and everyone at the Lynn Sage Cancer Research Foundation, Northwestern Memorial Hospital and the Robert H. Lurie Comprehensive Cancer Center of Northwestern University for making Chicago a world leader in breast cancer research. Together, we will find a cure.”

“We are proud to join the Lynn Sage Cancer Research Foundation in raising breast cancer awareness in Chicago,” said Michael Kelly, General Superintendent and CEO of the Chicago Park District. “We hope by lighting Soldier Field and Buckingham Fountain in pink, these iconic Chicago landmarks will remind Chicagoans and tourists of the importance of early detection and treatment but also serve as a beacon of hope for those whose lives have been impacted by the disease.”

Formally called, “Light the Way to Find a Cure,” the campaign centers on visually reminding the public that early detection of breast cancer leads to better outcomes. This year, along with the Chicago Park District, the Willis Tower, John Hancock Building, Merchandise Mart, and nearly 200 buildings and area attractions have all partnered with LSCRF to go pink. The campaign invites area buildings, landmarks and businesses to participate either through illuminating their structures pink or by donning banners and flags for the month of October.