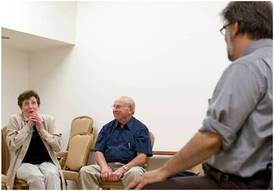 Twice a month, a jam session takes place on the third floor of Northwestern Memorial’s Prentice Women’s Hospital. A diverse group of men and women, ranging in age and ethnicity, gather in a circle with instruments in hand and sing together. This is no ordinary jam band; all its members are impacted by a neurodegenerative disease. They are participating in creative arts therapy which is offered through Northwestern’s Parkinson’s Disease and Movement Disorders Center.

Initially launched exclusively for people with Parkinson’s, creative arts therapy has since expanded to include people in the early stages of Alzheimer’s disease through the Cognitive Neurology and Alzheimer’s Disease Center. Caregivers are also encouraged to participate in the bi-weekly therapy session. The class combines music and art therapy to help patients address the physical and emotional components of their illness. In the past, drama therapy was also integrated into the program.

“Patient care is much more than just medical; it’s caring for the whole person,” said Tanya Simuni, MD, a neurologist at Northwestern Memorial and director of the Parkinson’s and Movement Disorders Center. Simuni is also an associate professor of neurology at Northwestern University Feinberg School of Medicine. “By providing creative arts therapy, we are hoping to help these patients find new means of fulfillment in their lives while also addressing some of the physical components of their illness.”

The class meets on the second and fourth Monday of each month in conference room Q on the third floor of Prentice Women’s Hospital. To learn more, call 312.503.3320 or email trupti@northwestern.edu.

For more information on creative arts therapy, watch the video below.