Share on Facebook Share on Twitter Share through Email Print
Northwestern Medicine™ welcomes Jared C. Robins, MD, as the Chief of the Division of Reproductive Endocrinology and Infertility and an associate professor in the department of obstetrics and gynecology at Northwestern University Feinberg School of Medicine. Robins is a nationally-renowned infertility expert whose research focuses on optimizing the conditions for embryonic development to improve assisted reproduction. 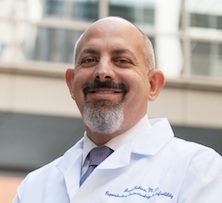 “I am honored to lead this team that is known for their commitment to cutting edge research and compassionate care,” said Robins. “I can’t think of a better place to take the next step in my career than at one of the nation’s premier infertility treatment centers.”

Robins received an undergraduate biology degree from Emory University in Atlanta and his medical doctorate from the State University of New York at Stony Brook. In 1998, he completed an obstetrics and gynecology residency at Albert Einstein College of Medicine in Bronx, New York before receiving, in 2001, a Fellowship in Reproductive Endocrinology and Infertility at the University of Cincinnati College of Medicine in Cincinnati, Ohio. Most recently, Robins served on the faculty of the Warren Alpert School of Medicine at Brown University in Providence, Rhode Island.

Robins is the Principal Investigator of a National Institute of Health-funded study looking at trophoblast differentiation, the development of the first cells from a fertilized egg that eventually forms a large portion of the placenta. Fellow doctors and those Robins mentored praised his ability to explain complicated research in an accessible way, as well as his superb teaching and clinical skills. He has been honored with several Young Investigator awards and served as the Medical Director of both the Program for Fertility Preservation and the Program for In Vitro Maturation (IVM) Excellence, the only training site currently available to study IVM techniques.

To make an appointment with Robins, visit our website.