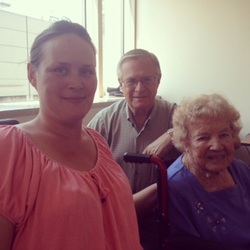 Doris Snyder considers herself a miracle.

This occurs to her when she reads the newspaper, when she goes to church every morning and when she visits her great grandchildren every chance she gets. These are small gifts because, as Snyder will tell you, she wasn’t supposed to be around for any of it.

“I feel great,” said Snyder, a Peoria resident who turns 105 years old on Aug. 10. “The past four years have been wonderful and I’ve been thankful for each and every day.”

Back when Snyder was 101 years old, she underwent a cutting-edge, experimental procedure at Northwestern Memorial Hospital’s Bluhm Cardiovascular Institute that replaced one of her heart valves without Snyder having to undergo open heart surgery. The valve had been rendered useless by aortic valve stenosis—hardening from calcium deposits that restrict the flow of blood from the heart.

Since the procedure, Snyder has been doing great, typically not even needing a walker or wheelchair to get around. She visited the Bluhm Cardiovascular Institute this past July for a checkup.

“We have come an incredibly long way in short period of time,” said Patrick M. McCarthy, MD, chief of the Division of Cardiac Surgery for Northwestern Memorial Hospital, director of the Bluhm Cardiovascular Institute and the Heller-Sacks Professor of Surgery at Northwestern University Feinberg School of Medicine. “Just a few years ago, Doris would have been told nothing could be done for her, but after this procedure, she was discharged from the hospital after a few days. She returned to her life and has continued to flourish. She’s an example to us all.”

Back in 2009, Snyder underwent a transcatheter aortic valve replacement (TAVR) procedure. The procedure is designed as a course of therapy for patients who are considered too weak to undergo conventional open-heart surgery—primarily the elderly. It uses expandable-stenting technology to insert a prosthetic valve while the heart continues beating, eliminating the need for cardiopulmonary bypass and its associated risks. The physicians at the Bluhm Cardiovascular Institute are among the pioneers in this procedure and have performed more TAVR procedures than any other facility in Illinois, treating more than 100 patients.

“Patients who are too weak to be surgically treated have very limited options for valve replacement,” said Charles J. Davidson, MD, a co-principal investigator for the trial and associate director for the Bluhm Cardiovascular Institute. Davidson says the procedure builds upon the balloon aortic valvuloplasty, but is a more durable treatment.

In her 105 years, Doris has never encountered any major health issues and is usually game to tackle most things that come her way. But open heart surgery was not one of them. According to the trial’s second principal investigator, cardiac surgeon S. Chris Malaisrie, MD, this experimental procedure was Doris’ only real option.

“Doris exemplifies how your state of health is not necessarily defined by your age,” added Malaisrie.