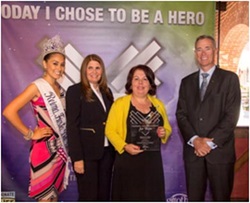 Juan Carlos Caicedo, MD, director of the Northwestern Memorial Hospital Hispanic Transplant Program and Martha Escamilla, LSW, a transplant social worker, were among those honored as “Heroes for Hope” at the Gift of Hope Organ and Tissue Donor Network Awards held on August 9.

The ceremony closed out National Minority Awareness Week activities and was attended by top city and local officials, including the General Consul of Mexico in Chicago Carlos Martín Jiménez and State Representative Luis Arroyo.

“It is a huge honor and motivation,” said Caicedo. “Everyone who works in transplants loves what they do and it’s rewarding to witness the wonders that organ donation can generate. I hope that the new generations value their roots and develop a love for community service.”

“Receiving this recognition from Gift of Hope is an honor for me and at the same time, it makes me feel even more responsible to inform our community on the importance of becoming an organ donor,” Escamilla said.

Caicedo created and leads Northwestern Memorial’s Hispanic Transplant Program, which serves Spanish-speaking patients and their families. This unique program offers a dedicated evaluation clinic that includes not only individualized medical treatments, but also recognizes how cultural differences affect each patient. The Hispanic Transplant Program has a bilingual team made up of surgeons, physicians, a social worker, a financial coordinator, a clinical research coordinator and other support staff.

Minorities make up more than half of the nearly 100,000 patients on the national waiting list for organ transplants, according to the Gift of Hope. Hispanic organ recipients are the fastest growing segment of that population and are expected to outpace the number of Hispanic donors. This is an issue because while donated organs can be transplanted across racial and ethnic groups, in some cases, such as kidney transplantation, genetic makeup plays a significant role in the degree to which a match exists between the organ donor and the transplant recipient.

Register as an organ donor.