Physicians, nurses and associates across the system climb more than 94 floors for the cause 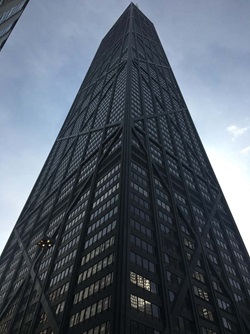 The John Hancock Center is an iconic landmark in the Windy City that towers 100-stories over Chicago with an observatory that gives an unprecedented 360 degree view of the city unlike anywhere else. Instead of the fourth tallest building drawing employees and tourists to the site, people from all across the Chicagoland area came together to help raise money and awareness for lung health.

On Sunday, February 26, more than 4,000 people participated in the 20th anniversary of the “Hustle Up the Hancock” by climbing 94 floors to the top of the 1,128-foot John Hancock building to help raise funds for the Respiratory Health Association of Chicago. Northwestern Medicine formed a team of physicians, nurses, patients and supporters to help raise funds for lung disease research, advocacy and education.

​“We are proud to be participating in ‘Hustle Up the Hancock’ for the sixth year in a row,” said Malcom DeCamp, MD, chief of thoracic surgery at Northwestern Memorial Hospital. “The more we can do to help raise awareness and funds for lung disease research, the better chances we have for finding improved treatment options for people suffering from asthma, COPD, cystic fibrosis and lung cancer.”

Montgomery-resident Sheila Alonso, a 54-year old asthma patient, was thrilled to completed 16 flights of stairs. A few years ago, before she underwent a procedure called bronchial thermoplasty at Northwestern Medicine Central DuPage Hospital, going up just a couple of stairs would leave her winded. 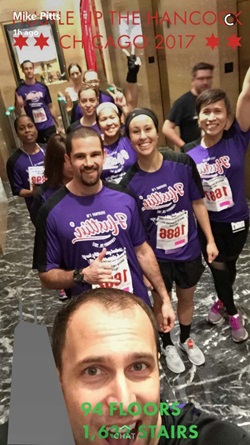 “It was inspiring to be surrounded by so many men, women and children who are dedicated to helping patients like me overcome lung disease,” said Alonso. “The experience gave me confidence that I can do even more physical activity. I’m planning to go out and buy a bike.”

Northwestern Medicine is a presenting sponsor for the “Hustle Up the Hancock.” 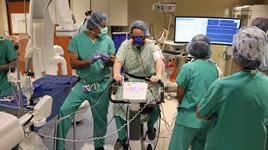