Share on Facebook Share on Twitter Share through Email Print
Two new restaurants with exciting tastes of Italy have just opened on the campus of Northwestern Memorial Hospital. Both restaurants are located at street level next to the Saint Clair Street entrance of Galter Pavilion. 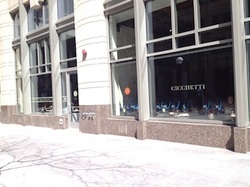 Located on the corner of Erie and Saint Clair, CICCHETTI (chick-KET-tee) is a 130-seat, Venetian-inspired full service restaurant with a spectacular bar. Adjoining it is the 90-seat Sopraffina Marketcaffè, an Italian fast-casual café that serves hot breakfast, lunch and dinner and features handmade pizzas and freshly tossed salads. They are the first newly constructed restaurants in the nation to receive Green Seal certification for sustainability, a highly sought-after designation from the nation’s premier environmental certification organization.
Helmed by Chicago chef Michael Sheerin, a Food & Wine Best New Chef in 2010 and a veteran of New York’s Jean-Georges and wd-50 and Chicago’s Blackbird and Trencherman, CICCHETTI features small plates with a Venetian accent. Assisting Sheerin as Sous Chefs are acclaimed Chicago chef Phil Rubino (L20, Acadia) and 2013 Food and Wine Best New Pastry Chef, Sarah Jordan.

The menu pays homage to Venice’s role as an international seaport during the Renaissance, a culinary hub created from different flavors carried on ships in and out of the city of canals. CICCHETTI diners are already enjoying house cured sardines, aged hangar streak carpaccio, a variety of oysters offered daily as well as a selection of pasta, risottos and meat and fish, among other dishes. An innovative dessert menu and a spectacular bar with both Italian inspired and classic cocktails by noted mixologist Daniel Casteel round out the experience.

All meats served at both restaurants are 100 percent raised without antibiotics. The La Colombe Earth Conscious coffee served was grown on farms with a minimum of two 3rd party environmental or fair trade certifications.

Adjacent to CICCHETTI, Sopraffina Marketcaffe is the sixth location in the fast-casual Italian group started by well-known local restaurateur, Dan Rosenthal in 1991. Rosenthal is also one of the creators behind Chicago restaurant mainstays including the original Harry Caray’s, Trattoria No. 10 and Poag Mahone’s.