Share on Facebook Share on Twitter Share through Email Print
In a symbolic gesture signaling positive progress in the fight against COVID-19, Northwestern Medicine Kishwaukee Hospital, in DeKalb, Ill. began dismantling a COVID-19 Rainbow Wall. The panoramic of colorful hearts on the hospital’s front windows was created last April as a sign of hope to guide patients, community members and staff through uncertain times as the pandemic gripped the nation.

The rainbow wall was constructed of individual hearts bearing the names of staff members, along with messages of hope. It represented the saying that first became popular in Europe: “Tutto andra’ bene,” which means “everything will turn out OK.” The rainbow shined brightly for more than a year to remind the community that the COVID-19 storm would pass.

During a ceremony to begin removing the hearts, Northwestern Medicine Kishwaukee Hospital leaders and staff reflected on the dedication, hard work and sacrifices employees made to ensure the community always received the very best care.

“When this wall went up it was incredibly powerful. The community could see the rainbow and it was a signal that we’re going to be OK,” said Jay Anderson, president of Northwestern Medicine Kishwaukee Hospital. “Today is an important moment. We have learned so much about COVID-19 and understand how to treat it.”

Hospital leadership acknowledge COVID-19 is not over and urge everyone to get a vaccine. However, they are optimistic the worst is behind us.

“I have mixed emotions today,” said Amanda Wigder, RN, nurse manager at Northwestern Medicine Kishwaukee Hospital. “Putting up the hearts was hopeful and inspiring. And even though we aren’t done yet, we want to celebrate how far we have come.”

According to Mike Kokott, vice president of operations at Northwestern Medicine Kishwaukee Hospital, COVID-19 levels in the local community have dropped to about one third of where they reached during the highest peak in November.

“Today is as important as the day we put the wall up because it signifies the future,” said Kokott. “We are very optimistic that we have made great progress against COVID-19 and are preparing to move into the next phase of this journey.”

Staff are invited over the next week to remove the hearts they created as a keepsake. Some of the hearts are being kept for a shadow box to be displayed at the hospital.

“We’ll be able to look at that shadow box year after year and remember that we survived,” said Rachel Fox, a member of the patient engagement team at Northwestern Medicine Kishwaukee Hospital. 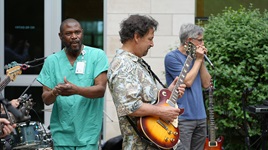 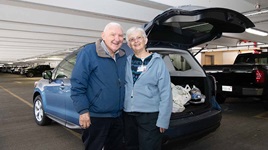 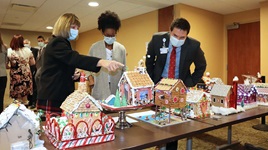 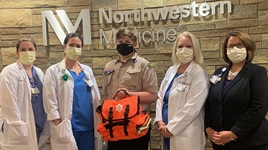