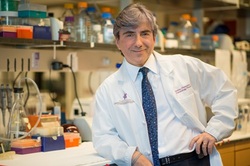 The current deputy director of the Lurie Cancer Center, Platanias arrived at Northwestern University Feinberg School of Medicine in 2002 as the Jesse, Sara, Andrew, Abigail, Benjamin and Elizabeth Lurie Professor of Oncology. Prior to joining the medical school, he was the chief of the Division of Hematology/Oncology at the University of Illinois at Chicago. In addition to his duties as interim director, he will continue his molecular biology and biochemistry research focused on signaling pathways in cancer cells.