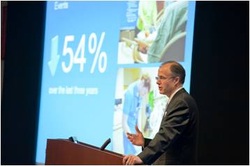 Congratulations to Peter J. McCanna, Executive Vice President Administration and CFO of Northwestern Memorial HealthCare, who was named Chicago CFO of the Year® in the Not-for-Profit category at an awards gala on Thursday, November 1. The Chicago CFO of the Year® Awards are presented to senior financial leaders who have made contributions to a business or non–profit in Chicago with quality, insight and direction.

McCanna serves on the Catholic Extension Society Board of Governors. He is a member of the Health Management Academy, and The Economic Club of Chicago. He received his Bachelor of Arts degree with honors from The University of Michigan, and earned his Master’s degree from the University of Texas at Austin.