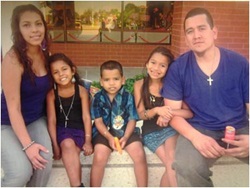 Paz Juarez and her three children were among the 3,300 participants in last month’s Magellan Development Chicago Spring Half Marathon, 10K and Junior Dash. The Northwestern Brain Tumor Institute is the officially charity of the event, which to date has raised more than $95,200. The Juarez family fundraised and ran the 10K race in memory of their beloved Eduardo “Lalo” Juarez, who succumbed to brain cancer in December 2012. Below, Paz shares her family’s journey and discusses their goal to raise greater awareness of brain tumors in honor of Lalo.

We were your typical young couple working to save money to buy our first home.  My husband Eduardo “Lalo” and I centered our lives and filled our hearts with our three young children Destiny, Bianca and Xavier.

On February10, 2011, one day before my husband’s 33rd birthday, Lalo was just about to start his day at work when one of his co-workers saw him fall face down in the snow. Unaware of what we were going to face together over the next two years, he called me and said, "Paz I need you to come pick me up. I’m not sure what’s going on, but I just woke up with the paramedics and my coworkers surrounding me."  At this point I had no idea what was going on and I quickly rushed to pick him up. When I finally arrived at his work, he came and sat in our truck and it looked like someone had physically hurt him.  As we were driving away, his supervisor called and suggested I take Lalo to the ER because they thought he may have suffered a seizure. I couldn't believe it!

At this point, Lalo didn't really want to go to the hospital, but he finally agreed and as we waited to see the doctor he began to suffer from another seizure. I had never seen someone go through a seizure and to see it happening to my husband right in front of me I felt so useless.  I couldn't do anything other than cry out for someone to please come help him and I had never felt so helpless in my life!  The hospital that we were at performed several different exams and told us he had a brain tumor but we still didn't know what we were going to be up against.

At the time, I worked for a radiology group and asked one of our doctors to review Lalo’s images from his CT and MRI. After reviewing his brain images my boss sat me down and said “If you want your husband to have the best possible care, I suggest you go to Northwestern Memorial Hospital” and instantly set up an appointment for us to see Dr. Bernard Bendok.  After we met with Dr. Bendok and his staff we instantly knew that this was the place where Lalo needed to be.

In March 2011, Lalo had to have a brain biopsy to figure out what type of tumor he had.  When the results came back, Dr. Bendok sat us down and told us it was a glioblastoma, the most aggressive and fastest growing tumor…a word neither of us had ever heard before. Dr. Bendok suggested we go see a neuro-oncologist Dr. Jeffrey Raizer, so we decided to meet with him and his wonderful team.  They sat down with Lalo and me and reassured us that they were going to do whatever they could to help my husband in his fight against the tumor. By the end of the day, Dr. Raizer and his team had set up Lalo with all of his radiation and chemotherapy appointments.

As we began this difficult time in our lives, Lalo told me how scared he felt and asked that I never leave his side. He told me I was the only one he trusted to take care of him and in my heart I knew from that day forward I had to be right by his side every step of the way. Like most families battling this tumor, we didn’t realize how much of our lives had to change and in order to keep up with his scheduled appointments. I made the best decision I could have ever made for my husband and that was to stop working. I knew there was no way I could let him go through this alone or have someone else take him to his treatments.

Lalo was going through a very tough couple of months and I would call Dr. Raizer's office every other day. We were in and out of the hospital and away from our kids what seemed like all the time. It was so hard for us to be without our kids because the past nine years there wasn't a single day we were not with our kids. I believe God knew how much Lalo and I needed to see our children and blessed us with a wonderful family that would bring our kids to the hospital to be with us and offer to stay with Lalo so that I could go home with our children to make sure they were feeling all right and to reassure them that everything was going to be ok.

In July 2011, Lalo had to have a partial resection of the tumor because he was having too many complications.  After his surgery it took him a while to recover but he did it!  We were all so happy at how well he had recovered; he looked healthier than he did before all this happened. We were so glad and thought that he was getting the miracle that we all were praying for.

Unfortunately with the horrible uncertainty that comes with this tumor, Lalo had to continue going through different treatments and on MRI days we were a wreck!  We never knew if we would be getting good news or bad news and if we did receive bad news, he had to start a new treatment. He didn't care…he was willing to try everything and put his body through anything in hopes that something would work for him.  He would always tell me, "I just want to live and watch my children grow up and grow old with you!"  He never lost his faith and hope that one day he would get better.

Sadly, on December 4, 2012, after almost 2 years of fighting for his life, Eduardo “Lalo” passed away at our home surrounded by our entire family. This was not only a devastating loss for me and our children, but for our family and friends too. He was such a loving husband, daddy, son, brother, brother-in-law, uncle and friend. He always put his family first, even during his fight, it was more important for him to see me and the kids happy. He was the kind of person that was always there to help anyone who needed it.

My husband was always willing to help others, so it was nice to have Dr. Raizer, his team and all the nurses be a huge part of our lives for almost two years. I am so grateful that they were there for Lalo and wanted to do the best they could to keep him in our lives as long as possible.  Everyone going through something like this needs to feel like they have someone special who is always there for them and for me it was our Infusion nurse Lily, I don't know what we would've done without her.

These months have been very difficult for me and my kids and since my husband passed away, we have felt the need to do something and to bring more awareness to brain cancer. On May 1, my kids went to their teachers and let them know that it was Brain Cancer Awareness month. They are always telling me we have to do something so now it’s our turn to honor him and keep his memory alive. That is why on May 19, me, my kids, my brother and his family, and Lalo's sister signed up for our first run/walk supporting Northwestern Brain Tumor Institute. We originally signed up for the 10k walk but after being there, surrounded by so many people, you get motivated to run. My kids were so focused and determined to finish the race in honor of their daddy and said "Mommy if we get tired we will just think of Daddy and say Daddy we are running for you!"  The kids were so proud of what they accomplished so the following day they all wore their medals to school to show off to their friends and teachers.

I believe running the race was a great start in honoring my husband and the fight he went through and to start our journey as a family to bring awareness to brain cancer. We hope to have the opportunity to do the race every year and to make a bigger team and raise more money for the Northwestern Brain Tumor Institute, so that one day they can hopefully find a cure for this horrible cancer.

I have learned that it takes strong people to work in this field and even stronger people to go through it!

The Northwestern Brain Tumor Institute (NBTI) is a nationally recognized leader in the fight against brain and spinal cord tumors, offering patients the most advanced clinical trial and treatment options available. Our ability to call upon the world-class resources of the Robert H. Lurie Comprehensive Cancer Center of Northwestern University, a National Cancer Institute (NCI) - designated Comprehensive Cancer Center, the research and medical expertise of the Northwestern University Feinberg School of Medicine and Northwestern Medical Faculty Foundation, and the preeminent healthcare facilities of Northwestern Memorial Hospital allows the NBTI to provide patients with the best possible care.

For more information on giving to Northwestern Brain Tumor Institute, visit its website.