My Twist on Cancer 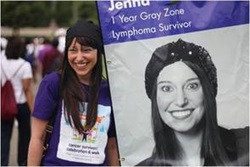 On December 20, 2010, at the age of 29, I was diagnosed with a rare blood disorder called Grey Zone Lymphoma that affects less than 300 people in the United States.  Because this disease is a relatively new diagnosis characterized by features of both Hodgkin’s and Non-Hodgkin’s Lymphoma, I visualized my cancer as an ice cream cone with a chocolate and vanilla twist. The twist was a part of my story-my journey- from the very beginning.

The news of my cancer diagnosis was both jarring and devastating. While it explained the months of flu like symptoms, night sweats and weight loss, I was an otherwise healthy young adult -who had always been proactive with my health.  It took a while for me to fully process my situation.

I decided to use the tenacity with which I wanted to live to fight this disease and hold on to hope. With the help of Northwestern’s Oncofertility Consortium, I took steps to preserve my chances of having biological children before I started treatment and began to believe that there could be life after cancer, and that there was tremendous hope amidst the trauma.

My oncologist, Dr. Leo Gordon and his team of miracle workers at the Robert H. Lurie Comprehensive Cancer Center of Northwestern University at Northwestern Memorial Hospital carefully guided me through months of intensive chemotherapy. On May 10th, after multiple surgeries, scans, blood transfusions, and over 720 hours of chemotherapy, I completed my 6th and final round of treatment.

During the days when I was immunosuppressed and couldn’t be out in public, I admittedly felt lonely.  I wrote about my deepest fears, hopes and dreams; yet still found myself disconnected from the world around me. I felt that while I was on pause, everyone else was on play.

I decided to change the rules. I chose to twist my way through cancer.  Out of desperation I posted a video on my blog of myself doing the twist alone in my room, and challenged my readers to meet me halfway. I asked them to send videos of themselves so they could join me on the dance floor. In response, I received hundreds of videos from around the world. To date, we have had 15,000 people “twist out cancer.”

On National Cancer Survivors Day, June 5, 2011, just weeks after leaving the hospital, I was asked to share my story and lead close to 4,000 cancer survivors and supporters in the twist at the Lurie Cancer Center’s Cancer Survivors’ Celebration & Walk. This day, this experience, this moment in time is one that I will carry with me for the rest of my life.

As I looked out and saw the crowd, adorned in purple and white t-shirts, walking, bending, moving and twisting out cancer, I found myself overwhelmed with gratitude and love.

Together we have the power to inspire, to provide hope, and to change lives. I hope you will join me in twisting out cancer on Sunday, June 3 at the 19th Annual Cancer Survivors’ Celebration & Walk in Grant Park.

NOTE:  Watch Jenna lead the twist and hear what the Walk means to her and other cancer survivors at Northwestern University.

Jenna Benn is the Assistant Regional Director of the Anti-Defamation League, and the Founder of Twist Out Cancer- a support community with a twist on cancer. Her non-profit organization was founded in October 2011, and is officially launching this June.