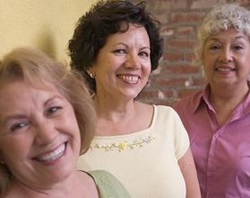 A gel form of tamoxifen applied to the breasts of women with noninvasive breast cancer reduced the growth of cancer cells to the same degree as the drug taken in oral form but with fewer side effects that deter some women from taking it, according to new Northwestern Medicine® research.

Tamoxifen is an oral drug that is used for breast cancer prevention and as therapy for non-invasive breast cancer and invasive cancer.

Because the drug was absorbed through the skin directly into breast tissue, blood levels of the drug were much lower, thus, potentially minimizing dangerous side effects — blood clots and uterine cancer.

The gel was tested on women diagnosed with the non-invasive cancer ductal carcinoma in situ (DCIS) in which abnormal cells multiply and form a growth in a milk duct. Because of potential side effects, many women with DCIS are reluctant to take oral tamoxifen after being treated with breast-saving surgery and radiation even though the drug effectively prevents DCIS recurrence and reduces risk of future new breast cancer.

The paper was published July 15 in the journal Clinical Cancer Research.

“Delivering the drug through a gel, if proven effective in larger trials, could potentially replace oral tamoxifen for breast cancer prevention and DCIS and encourage many more women to take it,” said lead author Seema Khan, MD, a Northwestern Medicine surgical oncologist. “For breast cancer prevention and DCIS therapy, effective drug concentrations are required in the breast. For these women, high circulating drug levels only cause collateral damage.”

“The gel minimized exposure to the rest of the body and concentrated the drug in the breast where it is needed,” Khan said. “There was very little drug in the bloodstream which should avoid potential blood clots as well as an elevated risk for uterine cancer.”

Women who have completed surgery and radiation are given oral tamoxifen for five years to reduce the risk of the DCIS recurring at the same place and of new breast cancer appearing elsewhere in the same breast or the other breast. Tamoxifen is an anti-estrogen therapy for a type of breast cancer that requires estrogen to grow.

Khan and colleagues conducted a phase II clinical trial to compare the effects of the gel, 4-OHT, with oral tamoxifen. They found after six to 10 weeks of gel application that the reduction in a marker for cancer cell growth, Ki-67, in breast tissue was similar to that of oral tamoxifen. The scientists also found equal amounts of 4-OHT present in the breast tissue of patients who used the gel or took the oral drug, but the blood levels of 4-OHT were more than five times lower in those who used the gel.

The reduction in the levels of 4-OHT in the blood also was correlated with a reduction in proteins that cause blood clots.

The study involved 26 women, ages 45 to 86, who had been diagnosed with DCIS that was sensitive to estrogen (estrogen-receptor-positive DCIS). Half the women received the gel, which they applied daily, and half the oral drug, which they took daily.

The gel application may also be more effective for some women. Oral tamoxifen doesn’t help all women who take it because it needs to be activated in the liver by specific enzymes and about a third of women lack these enzymes, Khan said. These women may not receive full benefits from the pill.

The research is supported by the grant N01-CN-35157 from the National Cancer Institute of the National Institutes of Health and BHR Pharma, LLC.