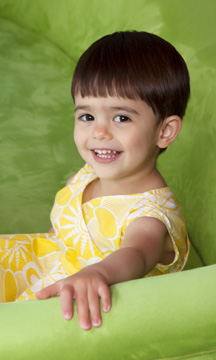 Now a healthy 2 ½-year-old, Jossie, her parents Jennifer and Jeremy Mullman and big brother Jack are returning to Northwestern Medicine® with other preemie patients and their families on October 12 to thank the NICU staff.

“It’s a pretty good day in my book when I can thank and hug the NICU nurses who provided loving care to Jossie,” said Jennifer Mullman of Wilmette.
Born on January 17, 2011, Jossie spent 22 days in the NICU. While she won’t remember the blizzard of February 1, 2011 that dumped nearly two feet of snow on the Chicago area, her parents still recall the calm assurances from the nursing staff that Jossie was safe, warm and loved and that they should stay home that day for their own safety.

Doctors were always available for questions, Jennifer Mullman said, and NICU nurses empowered parents to provide nurturing, hands-on care to some of Northwestern Medicine®’s most fragile patients. Prentice’s specially trained NICU staff cares for about 1,600 newborns annually, both those born at Prentice and transferred there from other hospitals. The NICU is a level III unit, accepting the most at-risk newborns.

“Perspective and time have allowed me to move on from the first questioning moments of Jossie’s birth,” Jennifer Mullman said. “I’m so grateful for the NICU reunion, to be given an opportunity to share my thanks to the doctors and nurses.”

More than 200 people, including the Mullmans, attended the 2012 inaugural NICU reunion, sponsored by Northwestern Medicine® and the March of Dimes, which partner together for the NICU Family Support Program, the only one of its kind in Illinois.

The reunion is expected to bring back more families this year for special moments of saying thanks.

“At the 2012 reunion, we, the parents, told our stories in stats – how many weeks gestation, how many weeks we were in the NICU, how old our children are now,” Jennifer Mullman said. “But in that moment, we saw our beautiful children running around, enjoying fun games, lively music and delicious treats. There was definitely a collective spirit among parents and their gratitude toward the hospital, of having that shared experience and being able to say thanks.”

The NICU family reunion is free but registration is required.