Share on Facebook Share on Twitter Share through Email Print
Northwestern Memorial Hospital recently earned the U.S. Department of Health and Human Services (HHS) silver medal of honor for its commitment to saving lives through organ and tissue donation. We are honored to be one of more than 400 hospitals across the country to have earned this distinction and was recognized during the 7th Annual National Learning Congress October 4-5, in Grapevine, Texas.

HHS awards the silver medal of honor to hospitals that have achieved organ donation goals established by the Breakthrough Collaborative on Organ Donation in 2003. These include: 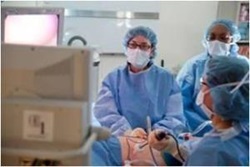 In earning a silver medal of honor, Northwestern Memorial Hospital achieved an organ donation conversion rate of 78.9 percent and a DCD rate of 33.3 percent.