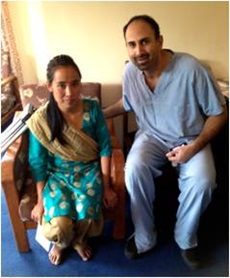 In June, we told you about a group of medical volunteers who traveled to Kathmandu, Nepal to perform free hip and knee replacements for impoverished patients with debilitating joint disease. The team, which included physicians and staff from Northwestern Memorial, were representing the non-profit group Operation Walk Chicago. When they returned to Chicago, they brought back a young woman named Sajina Tamang. At only 23 years old, Sajina doesn’t fit the profile of a typical joint replacement patient; in fact, there’s very little that’s typical about her story.

Sajina’s long journey to Chicago began in November 2010 when the Operation Walk team encountered her while assessing patients at Nepal Orthopedic Hospital. Physicians immediately noticed the young, petite woman who was barely able to walk and in obvious pain. They were astonished not only by the severity of her injuries, but also by all she had endured.

When she was only 18, Sajina left Nepal to seek work in Lebanon so she could send money back to support her family, a common practice in the impoverished nation. Prepared to work as a maid, she found herself trapped in a home where they refused her pay and abused her; the horrific experience came to a climax when she was thrown from the fifth floor of a building and left to die. Unconscious for five days, she underwent a surgery in Lebanon in an effort to stabilize a severely fractured pelvis and hip. She was eventually able to return to Nepal with the assistance of Amnesty International. Despite the best efforts of the surgeons in Lebanon, her injuries left her bedridden for a year and unable to move without the help of her family.

When Dr. Victoria Brander and Dr. David Stulberg, co-directors of Operation Walk Chicago, met Sajina they were compelled to help her, but recognized that the required surgery was too complex for the limited resources of the Kathmandu hospital.  That’s when they got the idea to bring her back to Chicago – a process that would take 18 months and a committed team of doctors, nurses, volunteers and hospitals.

After a year and half of preparation and planning, Sajina finally arrived in Chicago in late June. Operation Walk had pulled together all the players and resources necessary, even arranging to have her travel, lodging and care donated. Northwestern Memorial provided housing, as well as her two surgeries and hospital stay free of charge.  Orthopaedic surgeons Stulberg, Dr. Lalit Puri, and Dr. Armen Kelikian all donated their surgical care. Northwestern Memorial’s Department of Anesthesiology also donated their services. The Rehabilitation Institute of Chicago* provided two weeks of extensive inpatient rehabilitation following surgery. Outpatient physical therapy was donated through Drs. Brander and Stulberg’s office. A group of round-the-clock volunteers who deemed themselves “Team Sajina” served as her surrogate family by driving her to therapy and doctor appointments, calming her nerves before surgery and taking time to show her around Chicago.

After three months in Chicago, Sajina still has a long road to recovery, but is on her way to being able to lead a normal, active life. In October, she’ll return home to Nepal where she hopes to pursue a job and pick up where things left off before that fateful trip to Lebanon. 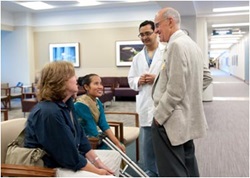 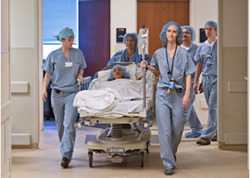