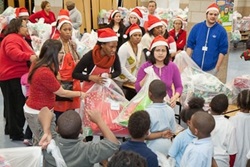 In the spirit of giving, more than 70 Northwestern employees delivered over 900 gifts to children in pre-K through 8th grade at Jenner Elementary Academy of the Arts on Chicago’s near north side. The Adopt-A-Child for the Holidays program is part of a larger Adopt-A-School initiative at the hospital, which has been in place for 27 years. Doctors, nurses and staff from Northwestern Memorial Hospital, Northwestern Medical Faculty Foundation and Northwestern Memorial Physicians Group donated presents to kids in need, which brought smiles to the faces of children and volunteers alike.

Among the employees who donated gifts this year was Deidre McGraw, a desktop analyst in the technology services support department at Northwestern Memorial. McGraw also spent the morning delivering presents to the children at the school.

“After my first year volunteering, I knew this was something I had to do each year,” said McGraw, who has participated in the program for nine years. “The experience is overwhelming because you know how much the kids look forward to us coming and then you get to watch their faces light up. It’s amazing to see.”

Shawn McGee, employee programs manager at Northwestern Memorial, credits the success of the program to the generosity of the hospital staff.

“It’s wonderful to see our employees come together each holiday season. This year, more than 950 people donated their time or a present,” said McGee. “I’m proud that our Northwestern Memorial family was able to make such a positive impact on the lives of so many children.”

Elizabeth Rottman, coordinator, special events at the Northwestern Memorial Foundation, has been donating gifts to the program since she began working at Northwestern, but delivered them to the students for the first time this year.“

I have been donating for years, but to actually see the little boy I bought a coat for truly made an impression on me,” said Rottman. “I was able to see how this impacted his life.

”Since the Adopt-A-School program’s inception, 11,400 children have been touched by the kindness of Northwestern employees through holiday gifts in December and back to school donations in August.

“Delivering holiday presents to the kids at Jenner Academy each year has made me appreciate the little things,” said McGraw. “And there’s just something about being there this time of year that makes it extra special.”