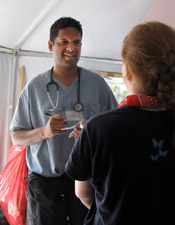 When a massive earthquake hit Haiti in 2010, more than 100 volunteers from Northwestern Medicine® traveled to the devastated country to offer emergency medical care to victims. Two years later, one of those volunteers is returning, this time training young Haitian doctors and medical students who are trying to rebuild the health of their nation.

“In Haiti, medical training is fairly rudimentary,” said Rahul Khare, M.D., assistant professor of emergency medicine at Northwestern University Feinberg School of Medicine and an emergency room physician at Northwestern Memorial Hospital. “They go to medical school and then the next year they’re a doctor. The years of training doctors receive in the U.S. isn’t possible there.”

With the help of a translator, Khare will head to Cap-Haïtien, Feb. 4 to 11, to deliver a series of lectures on emergency medicine and work side-by-side with Haitian doctors and medical students in a local hospital, offering advice and guidance. He plans to teach basic emergency care, such as how to give a thorough physical exam and the best way to use specific medications in an emergency room setting.

“There might only be one CT scanner in the entire country,” Khare said. “If the doctors are dealing with head trauma and don’t have access to a CT scanner, knowing how to do a very good physical exam and knowing what to look for in this exam is useful and can be life-saving.”

This will be Khare’s third trip to Haiti since the earthquake. He said the country and its people have given him a greater understanding of global healthcare issues and have helped him fulfill a goal he set when he decided to become a doctor.

“There are some extremely smart doctors and medical students in Haiti, and they are eager to learn,” Khare said. “I went into medicine to give to people and this is a great opportunity to do so.”

Stay tuned to this blog for updates from Dr. Khare during his visit to Haiti.