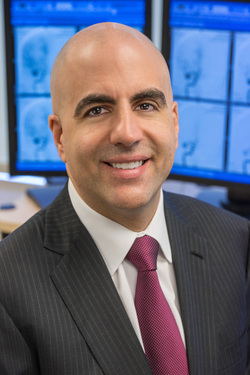 After Susan Wakulich was told she had an aneurysm, she figured an invasive brain surgery and lengthy recovery lay ahead of her.
“I was devastated,” said Wakulich, who is 56 years old and lives in Chicago’s western suburbs. “I knew this was a serious diagnosis. Then I met Dr. Bernard Bendok who told me about a new trial that involved a less invasive procedure. It was something I didn’t even know was an option.”

Northwestern Medicine® is participating in a multi-center U.S. clinical trial to evaluate the safety and effectiveness of the Microvention Inc. FRED™ flow diversion system (Flow Re-Direction Endoluminal Device) for the treatment of wide-necked intracranial aneurysms. Wakulich was the first individual at Northwestern Memorial Hospital – and one of the first in the Chicago area - to enroll in a this trial that involves inserting a small, metallic mesh tube via a micro-catheter into the blood vessel across the entrance to the aneurysm. The device contains the flow of blood within the tube to keep it away from the aneurysm. This causes the aneurysm to clot and minimizes the chance of rupture

Bernard R. Bendok, MD, a neurological surgeon at Northwestern Memorial, performed Wakulich’s surgery on March 12. She was released from the hospital three days later and continues to recover.

“Historically, large aneurysms, such as the one like Susan’s, are particularly difficult to treat,” said Bendok, who is also a professor of neurological surgery, radiology and otolaryngology at Northwestern University Feinberg School of Medicine. “This new device system may offer additional benefits over first generation flow diversion devices because it can be partially deployed, retrieved and accurately repositioned or redeployed to ensure the most precise placement.”

An estimated six million people in the United States have an unruptured brain aneurysm.  An aneurysm is a weak area in the wall of a blood vessel that causes the blood vessel to bulge or balloon out. When an aneurysm occurs in a blood vessel of the brain, it is called a cerebral aneurysm. According to the National Institutes of Health,* people with a small, unruptured aneurysm may have few if any symptoms, while a growing aneurysm may result in localized headaches, eye pain, vision problems or loss of feeling in the face. In the event of a rupture, symptoms are sudden and severe and can include headache, nausea and unconsciousness.

Although aneurysms can occur at any age, they are most prevalent in adults ages 35 to 60 and more common in women than in men. Dr. Bendok recommends that people with a strong family history of aneurysms be screened. Identifying and treating an aneurysm before it ruptures can make the difference between life and death. A ruptured aneurysm is fatal in approximately 40 percent of cases.

“The results of this national trial could change the way large aneurysms are treated in a way that is a huge benefit to the patient,” Bendok said. “Not only is this safer, it’s less invasive, which drastically cuts recovery time. We are thrilled to offer participation in this study to our patients.”

For more information about the FRED Trial at Northwestern Memorial Hospital contact Byron Yip or 312.503.3904.