Share on Facebook Share on Twitter Share through Email Print
When Robert Baittie noticed his leg dragged a bit when he ran on a treadmill, he didn’t think it was anything. Then his foot would catch on the carpet and sometimes he’d accidently slam his shoulder into the wall after misjudging a corner. In 2012, Baittie was referred to a neurologist, who diagnosed him with Parkinson’s disease. He was 52 years old.

For Baittie, what started as a personal set back, has turned into a cause he’d dedicated his life to. He is an active participant in a clinical trial in an effort to help isolate a Parkinson’s biomarker, while continuing to run his own, award-winning design firm, Bob Baittie Design, Inc. Over the past year he has been documenting his life with Parkinson’s through his blog entitled “Tremors in the Universe,” which, is now being published as an inspiring personal memoir.

“Parkinson’s changed my life and actually turned out to be a blessing,” said Baittie, a Vernon Hills resident and father of three grown children.  “It made me realize what’s important and I am enjoying every day. We all have challenges, maybe financial, or a job or a divorce, but we’re all dealing with something. This isn’t the end of the world, I look at it more as an inconvenience.” 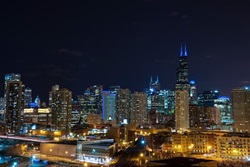 In honor of Parkinson’s Awareness Month and patients like Baittie, the National Parkinson Foundation of Chicago has also arranged to illuminate the Chicago skyline blue from April 18 to 30.

Parkinson's disease is a progressive degenerative disorder that affects nerve cells, or neurons, in the part of the brain that controls movement. This year, more than 50,000 Americans will be told they have Parkinson’s disease, according to Tanya Simuni, MD, director of the Northwestern Medicine Parkinson’s Disease and Movement Disorders Center and Baittie’s neurologist.

“Parkinson’s disease awareness leads to more clinical trials to study new treatments and new medications to help the nearly 1.5 million people in the United States living with Parkinson’s,” Simuni said. “And these patients aren’t alone. We are fighting this disease right alongside them to provide the best possible treatments today while working to uncover the Parkinson’s treatment of the future.”

In 2013, Bob’s daughter Amanda started team Martini Shakers for Moving Day Chicago. The team’s incredible efforts raised well over $13,000. In 2014, with their goals set even higher, the team hosted an array of fundraising events, such as a Teenie Martini Party and a Trash to Treasure garage sale. Utilizing Robert’s blog, the Martini Shakers also undertook a unique effort to try and recruit an honorary team member from each of the 50 United States. They met and exceeded this goal with 50 states were represented along with 4 countries. Their team also exceeded their fundraising goal in 2014 and raised over $18,000.