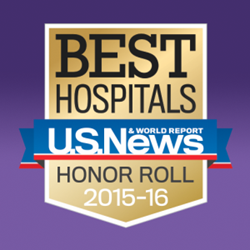 “We strive for excellence in all that we do and these rankings reflect our drive as a growing health system to be among the best in the nation,” said Dean M. Harrison, Northwestern Memorial HealthCare’s president and CEO. “We applaud the talented physicians, nurses and staff who have earned this recognition. Their exceptional efforts to provide the very best in high-quality patient care supports our mission to always put our Patients First.”
The Best Hospitals Honor Roll highlights 15 hospitals out of nearly 5,000 nationwide for their expertise in treating the most challenging patients in at least six medical specialties. Northwestern Memorial is nationally ranked in 13 out of 16 specialties – with top 10 recognition in six specialties – including:

For the third consecutive year, Northwestern Memorial is recognized as a top 10 program for Endocrinology & Diabetes, ranking 7th in the nation.
“Diabetes is one of the top public health issues of our generation and Northwestern is leading the way to find a cure and to deliver state-of-the-art patient care to reduce disease complications in both the hospital and outpatient setting,” said Joe Bass, MD, PhD, chief of the division of endocrinology at Northwestern Memorial. “Our dedicated team of specialists is working every day to improve the lives of patients living with diabetes and to advance its treatment through our integrated network of clinical and pre-clinical research programs."

Northwestern Memorial’s urology program is ranked 8th in the country, climbing one spot from the 2014-2015 U.S. News rankings.
“Our program is among the nation’s oldest, most experienced, and most respected in the field of urologic care and we pride ourselves on being consistently recognized for excellence by U.S. News,” said Anthony Schaeffer, MD, chair of the department of urology at Northwestern Memorial. “Our team of experts is dedicated to working with patients to find the best individualized treatment for their conditions while offering the most compassionate care possible.”

Northwestern Memorial is ranked as the 9th best Cardiology & Heart Surgery Program in the country and entered the top 10 for the first time.
"In 2004, we launched the Bluhm Cardiovascular Institute as a nascent idea that would recruit and develop a team with multiple skills focused on making a difference for our patients. After rapidly rising in the rankings, 10 years later, Northwestern is at the forefront of revolutionary changes in cardiovascular care and research with exceptional outcomes for many complex procedures," said Patrick McCarthy, MD, executive director the Bluhm Cardiovascular Institute and chief of cardiac surgery at Northwestern Memorial. “Our ranking this year places us in the top 10 heart programs in the United States and we are gratified that our team has earned this national and regional recognition. We remain focused on providing our patients with the best heart care in the United States and look forward to expanding access to this exceptional level of cardiac care across our growing health system.”
“Our heart program at Northwestern is intensely focused on achieving the best outcomes with the lowest risk for patients,” said Clyde W. Yancy, MD, associate director of the Bluhm Cardiovascular Institute and Northwestern Memorial’s chief of cardiology. “Beyond patient care, we’re committed to discovering breakthroughs in heart care through high impact research and investing in educating and training the next generation of world-class clinicians and investigators.”

Northwestern Memorial is ranked 10th in the country for Neurology & Neurosurgery Program making it once again the highest ranked neuro program in Illinois and Chicago for the 9th consecutive year.
“Northwestern has a longstanding tradition of being a premier destination for all aspects neurological care,” said Dimitri Krainc, MD, PhD, chair of the department of neurology at Northwestern Memorial and director of the Center for Rare Neurological Diseases at Northwestern University Feinberg School of Medicine. “Our reputation for excellence in clinical research and providing the very best care for our patients attracts the best and brightest minds in neurology and neurosurgery. Through our academic endeavors, we’re committed to developing the future leaders in these fields.”
“The field of neurosurgery is rapidly evolving and Northwestern is at the forefront of this innovation,” said Michel Kliot, MD, interim chair of the department of neurological surgery. “Working closely with our colleagues in neurology and other related specialties at the cutting edge of research, we offer patients the best possible treatments of today while striving to move science forward through advanced clinical research to unlock the treatments of the future.”

In addition to its top 10 programs, Northwestern Memorial was also recognized in the following clinical specialties:

Central DuPage Hospital’s Orthopaedics Program was once again recognized nationally, ranking 36th in the country. Less than 3 percent of the hospitals evaluated by U.S. News were ranked in even one specialty.

The hospital rankings are the result of evaluation of objective information including patient survival and safety data, the adequacy of nurse staffing levels and other quality and performance. The specialty rankings and data were produced for U.S. News by RTI International, a leading research organization based in Research Triangle Park, N.C. Using the same data, U.S. News produced the state and metro rankings. View rankings.