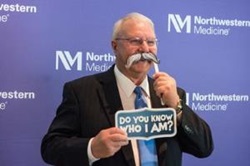 Dan Niskanen has worked at Northwestern Medicine Lake Forest Hospital for so long, he’s practically a part of the institution. His official title is special systems engineer, but within the hospital’s halls, he is simply called “The Legend.”

Believed to be the longest tenured employee ever at Lake Forest Hospital, hospital leaders celebrated his five decades of service, along with many other longtime hospital employees, on May 19, 2016. This summer, Niskanen, 65, will transition to a part-time employee and will fully retire, according to him “one day.” When he does, count on him to return to the hospital as a volunteer.

“This hospital is like my home and the people here are like my family,” said Niskanen, of Gurnee. “To me, this isn’t work. I come to the hospital every day and do what I love and what I’m good at.”


Statistics on 50-year employees are hard to come by, but 58 percent of workers ages 60 to 64 were employed for at least 10 years with their current employer in January 2014, compared with only 12 percent of those ages 30 to 34, according to the U.S. Bureau of Labor Statistics.

Niskanen arrives for work at 6:30 a.m. every day and unofficially considers himself on-call 24/7 since there are some equipment questions only he can answer. When designers planned the new hospital’s internal workings, they ran some of the systems by him first.

“Dan Niskanen is the heart of this hospital,” said Thomas J. McAfee, president of Northwestern Medicine Lake Forest Hospital. “He may do most of his work behind the scenes, but the knowledge and positive attitude he brings to work every day translates into a great experience for our patients. We are an outstanding hospital, thanks to our dedicated employees like Dan. We are fortunate to have Dan on our team.”

Officially, Niskanen monitors and maintains the building automation and medical gas systems, as well as the fire alarm and sprinkler systems and nurse paging system. Unofficially, he’s the hospital’s biggest cheerleader and historian. One second he’s talking to the CEO about the construction of the new hospital and the next he’s chatting with a cafeteria employee about her son’s birthday party. All it takes is one introduction and chances are Niskanen will not only remember your name but will also call out a friendly “hello” the next time he passes you in the hallway.

Niskanen began working at Lake Forest Hospital when he was 15 years old and attending high school, earning $1.07 per hour for his part-time work. After graduation, he continued his studies, earned a state power engineering license and soon joined the engineering team full time. He holds three engineering related licenses and numerous certifications that help him keep the hospital humming. Hard work is in his family’s bloodline. Niskanen comes from a family of 10, which includes his father, a former employee, as well as his brother, Karl, who currently works in the engineering department.

Throughout the years came some perks. When the movie “Ordinary People” was filmed at the hospital in 1980, Niskanen was in charge of hooking up the cameras and communications equipment, as well as making certain everything ran smoothly for the crew and actors. Then vice president of Universal Studios was so impressed with his work that he invited Niskanen to have lunch and seated him between Mary Tyler Moore and Timothy Hutton.

But it’s not the occasional movie star that keeps Niskanen coming to work – it’s the doctors, nurses and staff he has met over the years at Lake Forest Hospital. In fact, Niskanen keeps an archive of photos that chronicle the history of the current hospital and many former employees. Every day he walks by the construction of the new Northwestern Medicine Lake Forest Hospital and remembers when the site was only fields.

“I know 50 years is a lot but I don’t want everyone making a fuss about it,” Niskanen said. “Every day I get to go to a place I believe in. In a way, I am helping our patients and making lives better. I can’t imagine working anywhere else.”