A year ago, Minnette Howard-Tiedemann’s eyesight just wasn’t working like it used to. All of the sudden driving was more difficult and her real estate contracts were harder to read. Instead of waiting for things to get worse, she did her research and scheduled a consultation with Surendra Basti, MD, a Northwestern Medicine® ophthalmologist. After a thorough evaluation and a series of tests, Howard-Tiedemann’s fear was confirmed -- she had cataracts.

“I was shocked because I never once considered myself old,” said Howard-Tiedemann, a 63-year-old Chicago real estate broker. “I’m the fastest walker on any Chicago sidewalk because I’m always late and always in a hurry. To me, this diagnosis was unacceptable. So when I heard Dr. Basti was using this laser technology for some of his cataract patients, I wanted to be the first in line.”

A cataract is a clouding of the clear lens of the eye which happens to many people as they age. By age 80, more than half of all Americans either have a cataract or have had cataract surgery, according to the National Eye Institute.

“For people with cataracts, it’s a bit like looking through a frosty or fogged-up window,” said Basti, an attending ophthalmologist at Northwestern Memorial Hospital and associate professor of ophthalmology at Northwestern University Feinberg School of Medicine. “Clouded vision caused by cataracts can make it more difficult to perform everyday activities such as reading or driving a car. While it develops slowly, with time, cataracts will eventually seriously impede a person’s vision.”

In a way, Howard-Tiedemann had perfect timing. Basti and his fellow Northwestern Medicine cataract surgeons had recently begun using a new laser machine that represented some of the latest and most sophisticated technology available when it comes to cataract surgery. This Femtosecond laser – or FEMTO laser – uses light instead of a blade to create the cataract incision and opens the cataract in a circular and predictable fashion. The laser also softens the cataract, decreasing the need for additional surgical maneuvers. After the cataract is removed, an artificial lens is placed inside the eye. Astigmatism correction can be performed with this femto laser and multifocal lenses can be used in conjunction with laser cataract surgery.

This laser procedure is easier for the surgeon and has several advantages for the patient, Basti said.

“Conventional technology using ultrasound provides good outcomes, so now surgeons are using lasers to remove cataracts earlier than ever before,” Basti said.“This new technology brings in levels of precision and predictability that further enhance cataract surgery. We no longer have to wait for cataracts to advance until the patient is practically unable to see. And the best part for many patients is that their dependence on eyeglasses can be significantly minimized.”

It certainly worked for Howard-Tiedemann who today is back to considering herself one of the city’s fastest walkers. Because of her job in real estate, she is driving all over the city showing properties to her clients and easily reading the fine print on contracts. She does is all without having to use glasses.

“It was a miracle,” she said. “Dr. Basti changed my life because seeing is so important to me. Without these two surgeries, I would not have been able to do my job or maintain my active lifestyle.”

Basti points out that cataracts affects nearly 22 million Americans and is not going away anytime soon.

“As our population ages and people live longer, cataracts will become even more of an issue,” he said. “Thankfully, it’s not something patients have to live with. With new, bladeless procedures such as this one, patients are seeing rapid restoration of high quality vision.”

Basti recommends discussing all treatment options with your physician when considering cataract surgery and checking which are covered by your insurance. 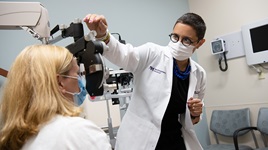 Keep an eye on ocular health with the return to in-person school and...