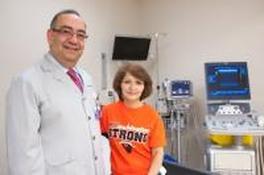 Cold wind was the trigger to pain greater than Paula Fore could have ever imagined, an electrical-feeling jolt that appeared suddenly and without warning on the left side of her face.

“This pain is real,” said Paula Fore, 49, a beauty shop owner, amateur motorcycle racer and grandmother of three from Washington, Ill., who started searching for a remedy to trigeminal neuralgia in 2008. “I was so scared.”

Trigeminal neuralgia is a sharp, shooting sensation similar to an electric shock on the side of the face. Northwestern Medicine® researchers have found a novel, multidisciplinary way to treat some suffering from this nerve disorder by using ultrasound techniques to help administer nerve blocks to stop the facial pain.


“These patients are in unbelievable pain and often have gone through numerous other treatments, including surgery, to try to correct it,” said Antoun Nader, MD, chief, regional anesthesiology/acute pain at Northwestern Medicine. “Working with two neurosurgeons, we’ve been able to develop a treatment that has proven to be highly effective in alleviating a condition that is difficult to treat.”

Trigeminal neuralgia is typically caused by a blood vessel pressing on the trigeminal nerve, one of the largest nerves in the head. Over time, the blood vessels rub on the nerve root with each heartbeat, wearing down the nerve’s insulating membrane, which causes pain that can be triggered by everyday occurrences like laughter, tooth brushing or walking in wind. The hot, shooting pain can happen on either side of the face, usually near the cheek or jaw.

Trigeminal neuralgia episodes last anywhere from a few seconds to a few minutes and come on suddenly and without warning. The attacks can often come in waves every one to two hours. It’s a difficult condition to treat because of the suddenness of onset and the location of the nerve. Painkillers are often ineffective.

When Fore first experienced trigeminal neuralgia in 2008, she went to the dentist.

“I thought it was a super, super bad tooth pain that did not go away,” she said.

A series of root canals followed by a dentist extracting seven teeth didn’t help, and surgery didn’t completely eliminate the pain, either. She was on a carefully monitored regimen of pain medication but didn’t like the side effects and found them only somewhat effective.

As her pain increased, her quality of life lessened. Fore, a successful motorcycle drag racer aboard a classic ’81 Honda racing bike she calls “Taz,” was unable to concentrate enough to race her bike. She didn’t feel confident playing with her three grandchildren, not sure when the pain would hit. Hobbies like running, weight lifting, kickboxing and restoring antique birdbaths faded from her daily schedule. Daily life became a struggle of running her beauty salon and trying to manage the pain.

“I was just so tired of the pain, of fighting my body,” she said. “Every time my heart beat there was pain.”

A salon client first suggested she might have trigeminal neuralgia, and Internet research led her to Northwestern Medicine. After a series of ultrasound-guided shots, she said she is on her way back to living the active life she wants to live.

“Finally with Dr. Nader I was putting all the pieces together of this chronic pain,” she said.

Before administering the treatment, Nader works with neurosurgeons Joshua Rosenow, MD, and Bernard R. Bendok, MD, to evaluate patients with trigeminal neuralgia or similar unexplained facial pain. The team evaluates who is more appropriately treated through surgery or other means.

Nader first started using ultrasound instead of the standard fluoroscopy to pinpoint the precise area of pain for the nerve block about 18 months ago. He has since published two papers on the success of the treatment. Over the course of one year, Nader followed 15 adult patients who received between one and four ultrasound-guided facial injections at the Northwestern Pain Medicine Practice after surgery or pain relief medication failed them. Thirteen of the patients treated in the study reported excellent or good pain relief after Nader’s injections.

“With fluoroscopy, X-rays of the head are so difficult to integrate images,” said Nader, who is also a professor in anesthesiology and orthopaedic surgery at Northwestern University Feinberg School of Medicine. “Ultrasound allows us to really see the complexities of the area being treated.”

Now able to live mostly pain-free, Fore recently helped her granddaughter sell ribbons to raise money for disaster relief efforts in her hometown of Washington, Ill., a small town devastated by tornados. Fore is a proud lifelong Washington, Ill. resident and owns her salon in the town.