In a moment in history where gender equality is at the forefront of conversation, there is still a disparity for women surgeons – especially women in neurosurgery.

According to data from a 2013 study in the Journal of the American College of Surgery, women neurosurgeons are substantially underrepresented among residents. Women represent only five percent of practicing neurosurgeons certified by the American Board of Neurological Surgery (ABNS). More importantly, the same data shows that there are only 219 ABNS-certified female neurosurgeons in the country with 25 full-time female academic neurosurgeons and two female chairs leading a neurosurgery department in the U.S.

At Northwestern Medicine, we’re proud to have four talented and passionate women in neurosurgery covering a vast amount of subspecialties including pediatric brain cancer, spine and epilepsy.

In honor of Women’s History Month, Northwestern Medicine is spotlighting the many neurosurgeons who are transforming the field of neuroscience and providing inspiration for girls everywhere interested in pursuing their dreams of becoming a neurosurgeon.

Aruna Ganju, MD, mentoring the next generation of women in neurosurgery
*Pictured above right
Dr. Aruna Ganju is a board-certified neurosurgeon at Northwestern Center for Comprehensive Orthopaedic and Spine Care at Northwestern Memorial Hospital specializing in the treatment of spinal column and cord injuries as well as tumors of the spinal column and cord. After noticing the impact her mentor had on her career path, Dr. Ganju has made it her mission to foster women in medicine through mentorship programs at the high school, college and graduate level. She’s worked with female students at the Illinois Math and Science Academy, which has led 66 percent of the students in the program to pursue a career in medicine. In addition, she has also worked with over 50 medical students at Northwestern University Feinberg School of Medicine who have gone on to pursue a career in neurosurgery and spine surgery. Of those medical students, nine were women. Previously, she was the co-chair of the Women’s Faculty Organization at Northwestern University Feinberg School of Medicine and Board President of Women in Neurosurgery.

S. Kathleen Bandt, MD, improving awareness of and access to treatment for patients with epilepsy
*Pictured above left
A graduate at Loyola University Stritch School of Medicine, with neurosurgical training from Washington University and Yale University, Dr. Katie Bandt focuses on surgical expertise in the management of epilepsy. She is one of a handful of neurosurgeons in Illinois trained to perform a novel surgical procedure that uses a laser to treat abnormal brain tissue in patients with epilepsy called NeuroBlate. She also has specialty training in the use of new technology that works like a pacemaker for the brain to treat epilepsy when it isn't safe to remove or use the laser to treat the part of the brain causing a patient's seizures. In addition to her clinical work, Bandt's has moved the needle in epilepsy research. Her work focuses on the development of a new understanding of epilepsy using advanced imaging data which she hopes to streamline the evaluation of a patient's candidacy for epilepsy surgery and contribute to improved outcomes following surgery. In addition, Bandt works in a leadership capacity with the Epilepsy Foundation of Greater Chicago serving on the Physician Advisory Board to increase awareness and access to the advanced treatment options for patients with epilepsy. 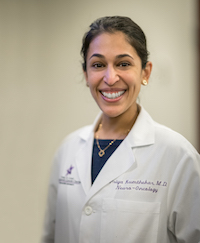 A neuro-oncologist at Northwestern Memorial Hospital and brain tumor researcher at Northwestern University Feinberg School of Medicine, Kumthekar is transforming the next wave of brain tumor care. She is the lead investigator in a first-of-a-kind nucleic acid-based drug that targets glioblastoma. In 2013, Kumthekar created the first central nervous system metastases program at Northwestern Memorial Hospital allowing patients a treatment plan tailored to each patients’ specific needs. Kumthekar was also the first recipient of the Latimer Fellowship Fund at Northwestern University, an opportunity to undergo broad-based clinical neuro-oncology experiences and rigorous research training. 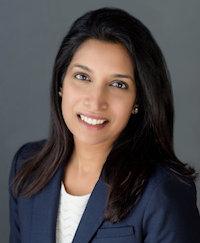 Dr. Dewan is a board certified neurosurgeon at Northwestern Medicine Central DuPage Hospital. She received her graduate degree from Northwestern University and completed her neurosurgical residency at Brown University. Her areas of clinical expertise are pituitary tumors, gamma knife radiosurgery and minimally invasive degenerative spine disorders. Dr. Dewan was inspired to become a neurosurgeon when her mother was rushed to Northwestern Medicine Central DuPage Hospital in 2000 with a ruptured aneurysm. The late Dr. Douglas Johnson performed her cranial surgery and she recovered well. Dr. Johnson was the first neurosurgeon that Dr. Dewan had ever met, and was one of the key people that lead her to pursue neurosurgery as a career choice. She now mentors young women and men who are interested in neurosurgery. In April, she will be volunteering her time to help indigent patients with complex neurosurgical issues in Southern India at the AIMS Hospital Group, or Amrita. She also serves on the executive board of directors for The Allendale Shelter Club, a foster home for children in the Lake Forest, Illinois. She is currently assisting with a radio show/podcast launch to broaden awareness to girls/young women regarding power careers in medicine and business.