Northwestern Medicine physicians, patients, survivors and caregivers participated in the 15th annual Lung Force Walk on Sunday benefiting the American Lung Association (ALA). Roughly 60 team members across the hospital system joined together to help raise, and surpass, the goal of over $5,000 to help in the fight against lung cancer and other lung diseases. 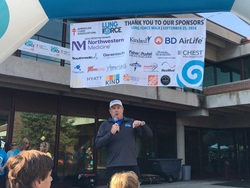 “Lung cancer is no longer stigmatized by people who smoke,” said Malcom DeCamp, MD, Northwestern Medicine’s chief of thoracic surgery who spoke at the opening ceremony." It can affect anyone of us and that is why we need to spread awareness and raise money so that we can help put lung cancer in the rear view mirror."

Along with Dr. DeCamp, Melissa McGurren, radio personality on the enormously popular morning radio show, 101.9 THE MIX, also spoke at the event. She shared her personal connection to the cause with her mother passing away from lung cancer a few years ago.

“I know how much it means to band together for this great cause,” said McGurren. “I couldn’t be prouder to be a part of such an amazing organization like the ALA and encourage a force of people to make a difference.” 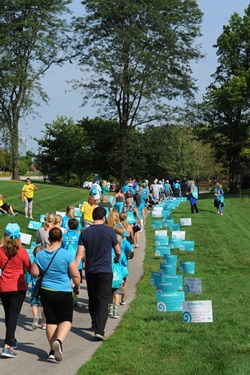 Nearly 900 people participated in the scenic 3.1 mile walk through the McDonald’s Hamburger University campus in Oak Brook on Sunday, September 25. The event raised more than $180,000 and will continue to take donations until October 25, which will go towards research to help develop better detection methods, treatments and ultimately, cures for the disease.

Currently, lung cancer is the leading cancer in men and women in the United States with lung cancer surpassing breast cancer as a cause of women’s death since 1987. According to the American Lung Association, an estimated 158,040 Americans will succumb to lung cancer each year.

If you would like to donate to the Northwestern Medicine Lung Force Walk team or learn more about lung health, please visit lung.nm.org.