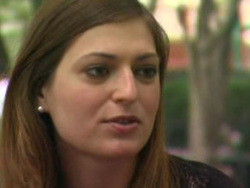 At first, Krista Easom figured the little red bump on her foot was nothing more than a blister. It didn’t hurt, but after a couple months, it didn’t go away either.

She booked an appointment with a dermatologist to have it removed. She wasn’t worried. Easom, a 24-year-old law school student from New Jersey, was healthy, had no family history of cancer and was getting ready to enjoy some time in her newly adopted city of Chicago.

That’s when she received the results from her dermatologist, who removed a part of the blister and had it tested.

It turns out that little red bump was malignant melanoma, the leading cause of skin cancer death in the United States. It’s a cancer that kills one person every hour, which translates to more than 8,700 Americans each year.

Further tests revealed that Easom’s melanoma had spread to her lymph nodes, which meant she needed a lymphadenectomy to have them removed. This major surgery includes a five-day stay in the hospital followed by an extensive recovery. About half of the patients who undergo this procedure suffer from wound infections because of the 12-inch incision’s hip-to-thigh location.

Easom and her family looked into her options and she was referred to Northwestern Medicine® surgical oncologists Jeffery D. Wayne, MD and Karl Bilimoria, MD, two of the very few surgeons in the country using a minimally invasive procedure to remove groin lymph nodes. This laparoscopic procedure may drastically reduce the recovery rate and chance of infection for patients like Easom.

“Only a handful of surgeons in the country are doing this and it makes a world of difference to the patient,” said Bilimoria, a surgical oncologist at Northwestern Memorial Hospital and an assistant professor of surgery at Northwestern University Feinberg School of Medicine. “Instead of a 12-inch scar, this laparoscopic procedure has only three very small incisions that total less than one inch. Because these incisions are so small, the chance of infection is far less. Instead of a five-day stay in the hospital, Krista went home the day after her surgery.”

Lymph nodes are the most frequent site of the spread of metastatic melanoma and surgically removing them is the only potential for a cure, Wayne said. “Surgery is the only way to make sure we get all of the cancer,” Wayne said. “We want Krista to move on with her life. The minimally-invasive procedure was by far, the quickest and safest way for her to do that.”

Just a few weeks post-surgery, Easom is already on her way. She will have regular check-ups for awhile but her CT scans and blood tests show that the surgery successfully removed all of her cancer. Easom is participating in a national clinical trial to see if this minimally invasive procedure can help other melanoma patients.

“I had this major surgery and didn’t take any time off from school or my internship,” Easom said. “The incisions were so small, I couldn’t even see them. They are monitoring my leg to make sure the swelling goes down, but I’m getting better and better each day.”

Bilimoria and Wayne are both members of the Robert H. Lurie Comprehensive Cancer Center of Northwestern University. To learn more about the Lurie Cancer Center, visit its website.

The American Cancer Society recommends professional skin examinations every year for people older than 40, and every three years for people ages 20 to 40. The best way to prevent skin cancer is to reduce your exposure to sunlight. Ultraviolet light is most intense between 10 a.m. and 4 p.m.