Vedanth is the second child for Krishnaswamy and her husband, Arun Balakrishnan, who also have a five-year-old son.

“I am in love, all over again,” said Krystle while holding Matthew in her arms.

Later on in the day, Matthew was surrounded by family including his older siblings who were happy to meet their new baby brother for the first time. 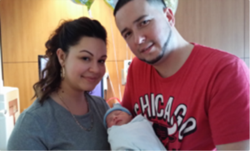 It was 2:04 a.m. on Jan. 1, when Northwestern Medicine’s first baby of 2015, Matthew Jay Hower, arrived on the scene. The baby’s mother, Krystle Hernandez, said that it was just after celebrating the first few seconds of the new year that she knew it was time to deliver her baby.

“Twelve o'clock hit and I went to go give Carlos and his mom a kiss, and my water just broke,” said Krystle.

Carlos Hower, Krystle’s boyfriend and Matthew’s father, took Krystle to Northwestern Memorial Hospital’s Prentice Women’s Hospital as quickly as he could from their North Side Chicago home and shortly afterward their new son Matthew was born, weighing 5 lbs and 13 ounces.

“It is really wonderful, like my New Year’s gift” said Krishnaswamy. “What a great way to start a year.” 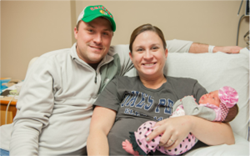 At Northwestern Medicine Central DuPage Hospital in Winfield, Ill., Amanda Somers gave birth to the hospital’s first baby of the new year at 4:15 a.m. The baby girl, Evelyn Somers, was welcome warmly by her family and hospital staff.