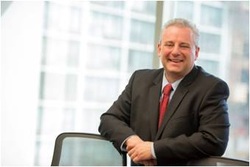 Northwestern Memorial Hospital is very proud to recognize Scott Ziomek, director, external affairs, who today received the American Hospital Association’s (AHA) Grassroots Champion Award. The award is presented annually to one individual from each state with winners being chosen by the state association. The 2013 honorees were recognized at a special breakfast at the AHA’s annual membership meeting held in Washington, D.C., on Tuesday, April 30.  Scott was one of 52 individuals honored this year.

Scott joined Northwestern Memorial in 2010 and is responsible for advocacy and lobbying activities at the local, state, and federal, levels of government. The Grassroots award is awarded for exceptional leadership in generating community activity in support of a hospital’s mission. Scott was recognized for his strategic leadership in helping to educate legislators and key publics on hospitals’ vital roles as providers of charity care and health programming.

To showcase this initiative, Scott developed a custom map of more than 85 legislative, congressional, aldermanic and cook county districts throughout Northwestern’s service area. The map pinpointed Medicaid and charity care patients being served in those districts, showing individual legislators how many of their constituents served by Northwestern Memorial.  This customized approach was presented to a variety of local and state leaders.  This integrated effort required that Scott not only work within legislative circles, but also with other Illinois hospitals and health leaders. Cumulatively, the effort was quite successful in explaining and showcasing how health budget cuts threaten the sustainability of charitable programming and access to care for communities most in need.

AHA’s Grassroots Champion award was created to recognize hospital leaders for effectively educating publics and key officials on major issues affecting hospitals’ vital roles in their communities and broadening the base of community support for issues affecting patients.

Northwestern congratulates Scott for this prestigious award and exemplary recognition—way to go Scott!