Share on Facebook Share on Twitter Share through Email Print
Northwestern Memorial Hospital’s urology program has been ranked as 9th in the country on the U.S. News & World Report 2014-15 Best Hospitals specialty ranking released on Tuesday, July 15. This is the second year in a row that Northwestern Memorial’s Department of Urology Surgery has been recognized as a top 10 program in the nation and the highest ranked urology program in Illinois and Chicago.

“Being ranked as one of the ten best urology programs in the nation is a great honor and one that reflects the quality care we strive to provide,” said Anthony Schaeffer, MD, chair of the department of urology at Northwestern Memorial and professor of urology at Northwestern University Feinberg School of Medicine. “Our urologists and nurses work closely with patients to develop individualized care plans to provide them with the most effective treatment and compassionate care possible.”

The U.S. News specialty rankings were driven by objective data such as procedure volume, death rates, and balance of nurses and patients at nearly 5,000 hospitals nationwide. A survey of physicians, who are asked to name hospitals they consider tops in their specialty, produces a reputation score that is also factored into the rankings. To be considered in the ranked specialties, a hospital first had to meet at least one of four criteria: It had to be a teaching hospital, or be affiliated with a medical school, or have at least 200 beds, or have 100 or more beds and the availability of four or more types of important medical technology. Next, hospitals had to meet a volume requirement, individually calculated for each specialty. The required volume was the number of Medicare inpatients from 2010 to 2012 who had various specified procedures and conditions in the specialty. Just 144 hospitals, only about 3 percent of those in the U.S., earned a national ranking in one or more specialties.

Northwestern Memorial placed to 10th in the nation on the publisher’s most exclusive ranking:  the Best Hospitals 2014-15 Honor Roll—the second, consecutive year in the Top 10, and third consecutive year on the Honor Roll. Northwestern Memorial is the only hospital in Illinois to make this prestigious ranking, and continues its place as the No. 1 in Illinois and the Chicago metro area, a distinction the hospital has held since U.S. News first introduced its state and local rankings three years ago. In all but two of the 14 specialties within which Northwestern is ranked, it ranks in the top 25 or higher—three of which are top 10. 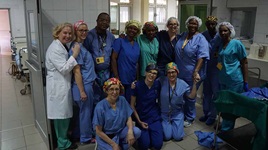