Share on Facebook Share on Twitter Share through Email Print
Researchers at Northwestern Brain Tumor Institute (NBTI) are seeking to understand if a vaccine made from a patient’s own blood cells may slow the growth of a type of brain tumor. The trial is studying the vaccine’s effect on glioblastoma multiformes (GBM), the most common and aggressive type of primary brain tumor. The trial is an example of a growing trend in cancer research that seeks to understand if vaccines can be used to turn a person’s own immune system into a weapon against cancers by slowing the growth of tumors. 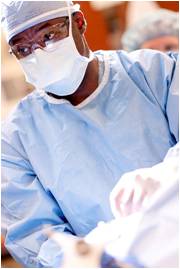 GBMs, which occur in up to 10,000 Americans annually, are typically treated with surgical resection of the tumor followed by chemotherapy and radiation treatment. “Glioblastomas are complicated to treat because they are aggressive, fast-growing tumors that are often resistant to standard treatment,” said principal investigator James Chandler, MD, co-director of the NBTI and surgical director of neuro-oncology at Northwestern Memorial Hospital. “In this trial, a vaccine is made using the person’s own white blood cells, which we hope will have the power to stimulate an immune response to kill brain tumor cells.”

The vaccine, called ICT-107, is created by collecting the participant’s white blood cells through a process called apheresis, which separates the components in the blood. The white blood cells are then treated to recognize the tumor cells turning them into immune cells, which early research indicates may be able to recognize and attack the tumor cells. Patients receive the vaccine in addition to standard treatment.

“Vaccines hold great promise as potential treatments for all types of cancer,” said Chandler, who is also a professor of neurological surgery at Northwestern University Feinberg School of Medicine. “More researchers are looking at this as a way to prompt an immune response to slow tumor growth and fight the cancer.”

To learn more about the trial, read the full press release.