Our Stem Cell Transplant Journey: Things We Learned Along the Way

Share on Facebook Share on Twitter Share through Email Print
Jill Langendorff Folan is a member of the Lurie Cancer Center’s Patient & Family Advisory Board.  In this blog, she shares the experience of her husband Mike going through a stem cell transplant. Jill and Mike are participating in the Lurie Cancer Center's 20th Annual Cancer Survivors' Celebration & Walk on June 2.

Our journey began almost a year ago, in June 2012, when my husband’s primary care physician told him he had lymphoma. 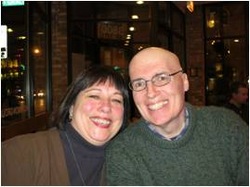 The next two weeks were a whirlwind of various oncologists, biopsies and hospital stays and by the end of the month we had a primary oncologist, a treatment plan and one round of chemo under our belts.  From the start, we knew that a stem cell transplant was our BIG GOAL.  Everything we did for the next nine months was in preparation for the transplant.  In October, Mike’s own stem cells were harvested and frozen; they’d be ready when Mike was.

While Mike received treatment in the months leading up to the transplant, I read the information from Northwestern’s stem cell team, our insurance company and everything I could find on the Internet.  I also emailed our oncologist with questions and discussed them with the transplant team.  For the most part, Mike and I felt prepared.  But, there are things we learned (or finally understood) as we lived through it in March 2013.  I’ve shared a few of these here to round out the official information:
Mike came home two weeks after his transplant and we settled into a new routine.  His PICC line was removed and his hair started growing back.  We had frequent labs and saw his oncologist weekly.  It’s now May, Mike is 74 days post-transplant and we’re headed for another new routine.  We just learned that his bone marrow biopsy and PET scan show no evidence of disease.  We are beyond thrilled!

NOTE: Be the Match*, (formerly the National Marrow Donor Program) will register potential donors on-site in Grant Park, free of charge, at the Cancer Survivors’ Celebration & Walk and 5K Run. Thousands of patients with cancer depend on the Be the Match Registry to find a match.  Patients need donors who are a genetic match, and donors with diverse racial or ethnic backgrounds are especially needed. Registering is easy and painless—and your support could save a life!