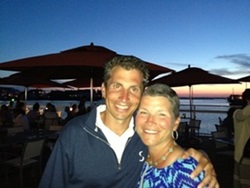 Less than a year ago, Angie Campolo’s mother was diagnosed with ovarian cancer and further tests revealed that Campolo herself was BRCA 1 carrier.
That was all she needed to hear.

Campolo scheduled a surgery to have her ovaries removed. “I was 45 years old, I had my children and I just didn’t see the point in waiting around for something to happen,” said Campolo, a Winnetka resident and mother of three girls, Mia, 16, Caroline, 14, and Claudia, 12. “It turned out to be one of the best decisions I ever made.”

Post surgery tests revealed Campolo already had ovarian cancer on one of her ovaries and on one of her fallopian tubes. Because of this discovery, she underwent four months of chemotherapy, which she completed in March. “I didn’t have any symptoms and if I had waited a year, I could have been a mess,” said Campolo. “My advice to women is to know your family history on both your mother and father’s side.”

Today, Campolo is feeling better and is thankful for her great support team, led by her husband, Joe. Because most of Campolo’s treatment started in December, Joe presented his wife with a present every day she had a chemotherapy treatment, calling them “The 12 Days of Chemo.” “His final present to me was a package to go to New York’s Fashion Week in September with my girls,” Campolo said. “For this trip, for my girls, I have a lot of reasons to return to my old self and to stay healthy. Because I was able to catch this early, and got the best possible treatment, I know that’s exactly what’s going to happen.”

For women living with ovarian cancer past or present - Northwestern Medicine and the Robert H. Lurie Comprehensive Cancer Center are hosting Ovarian Cancer Survive & Thrive program on Sept. 28. The one-day, free interactive course is also for women at increased risk of developing the disease along with their families and caregivers. The Ovarian Cancer Survive & Thrive event will be held from 8:30 a.m. to 5 p.m. on Sept. 28 at the Robert H. Lurie Medical Research Center, 303 E. Superior St. There women will find the latest information, valuable resources and access to experts in the field. It will also be an opportunity for women to connect with others in the ovarian cancer community. The program is made possible by the generous support of Bears Care®, the charitable beneficiary of the Chicago Bears.