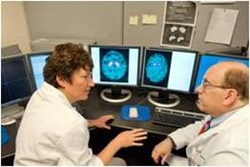 The Northwestern Medicine® Parkinson’s Disease and Movement Disorders Center will host its annual Patient and Family Symposium on Saturday, September 29, at Northwestern Memorial Hospital. The free symposium entitled “Parkinson’s Disease Moving Forward” will provide patients, families and caregivers with information about the many facets of living with Parkinson’s including treatment options, research updates, and tips for managing the psychological aspects of the chronic disease.

Parkinson’s is a neurodegenerative disease that affects up to 1.5 million Americans with an additional 50,000 to 60,000 new cases identified each year. People with Parkinson’s lack dopamine in the brain, which leads to tremor, slowness of movement, muscle stiffness and balance problems.

“Parkinson’s is a disease that impacts not just the person diagnosed with the disease, but also their family and loved ones,” said Tanya Simuni, MD, director of the Parkinson’s Disease and Movement Disorders Center. “The disease evolves, causing its symptoms, as well as its burden, to change overtime. The goal of this symposium is to provide patients, families and caregivers the educational tools they need to not just live with the disease, but to thrive with it.”

Attendees will have an opportunity to listen to Northwestern’s Parkinson’s disease experts, as well as speakers from other organizations, discuss the many aspects of research and patient care. Sessions will cover a variety of topics including:

Following their presentations, the physicians will join together on a panel during which attendees can ask questions. The symposium will wrap with a series of breakout sessions including: a medications and surgery question-and-answer; a discussion about exercise led by Santiago Toledo, MD, physical rehabilitation medicine specialist at the Rehabilitation Institute of Chicago (RIC) and assistant professor at the Feinberg School; therapy through art and music lead by Leslee Goldman, LPC, ATR-BC, and Jenni Rook, LPC, MT-BC; and care partners and children of people with Parkinson’s with Diane Breslow, MSW, coordinator of the Parkinson’s Disease and Movement Disorders Center. Art created by patients with Parkinson’s will also be exhibited during the symposium.

The symposium will run from 8 a.m. to 12:30 p.m. and includes continental breakfast and free parking. Northwestern Memorial is located at 251 E. Huron Street in Chicago. To register for the symposium, call 312.926.8400.