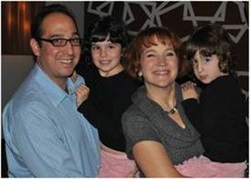 When reflecting back on the most significant day in our lives, most of us think of a wedding anniversary, or a birthday. For Howard Zwirn, however, January 16, 2004 is a much more important milestone – it’s the day the seizures he had experienced for seven years stopped.
Zwirn experienced his first seizure at the age of 28 and was diagnosed with mesial temporal sclerosis, a condition that was causing a type of focal epilepsy. Zwirn’s seizures continued, taking a toll on his life. For several years, Zwirn continued to try to control his seizures with medications and lifestyle changes. However, he found little relief.

Nearly seven years after his initial diagnosis, Zwirn, with the support of Jeannine, decided to go through a battery of tests to determine if he was a candidate for surgery that would potentially stop his seizures. Results indicated that he was a perfect candidate for surgery. After much discussion and many questions, the decision was made to move forward with the procedure.

During surgery, Joshua Rosenow, MD, director of functional neurosurgery at Northwestern Memorial, removed a portion of Zwirn’s left temporal lobe containing the damaged hippocampus, the source of his seizures. After six days in the hospital, he returned home to start his recovery and rehabilitation. He went through several months of physical and occupational therapy focused on helping with his reading, writing, memory and speech. After several months, he was able to return to work as an attorney and eight months to the day of his surgery, the Zwirns welcomed their daughter Rachel to the world.

Today, eight years since the surgery, Zwirn remains seizure free and lives a full and active life. He and Jeannine have since welcomed a second daughter, Meredith, to their family, which also includes Lucy, a Labrador retriever. Zwirn has a successful career as an environmental consultant and has dedicated himself to raising awareness and funds for epilepsy-related causes and organizations.

“Howard is a stellar example of how well epilepsy surgery works; not only is he seizure free, but he’s using his good fortune to benefit others going through the same thing,” said Rosenow. “Epilepsy surgery is one of the most successful neurological surgeries available, but it’s underutilized. Howard is proof that these patients can go on to do great things and lead extremely fulfilling lives without the burden of continuing seizures.”