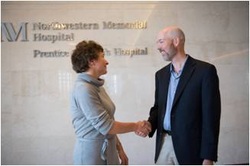 The Paul Ruby Foundation for Parkinson’s Research recently presented a check for $100,000 to Northwestern Memorial Foundation to support Northwestern Medicine Parkinson’s disease researchers. To date, the group has donated more than $400,000 to fund research projects  to advance understanding of Parkinson’s, a neurodegenerative illness that affects nearly 1.5 million Americans.

The Paul Ruby Foundation was founded by its namesake, Paul Ruby, who set out on a personal journey to help find a cure after being diagnosed with young-onset Parkinson’s in 2006.


“Being diagnosed with Parkinson’s was scary and shocking; it still is to some extent,” said Ruby, who lives in Geneva, Ill. “With this foundation, I’m trying to make a positive out of it. It’s been very therapeutic for me to be involved with the process of helping to fund research and spreading awareness.”

The Paul Ruby Foundation is an entirely grassroots organization with volunteers serving as staff and on its board. Funds are raised through a variety of events and campaigns, culminating with the annual Concert for a Cure, a large festival in Geneva with live music and family fun. Each year, the foundation’s board comes together to listen to research proposals from Parkinson’s researchers at Northwestern and then votes on which projects to support. This year, the board chose the following research projects:


“The value of the Paul Ruby Foundation’s support is immeasurable,” said Tanya Simuni, MD, director of the Northwestern Parkinson’s Disease and Movement Disorders Center. “Beyond just the monetary contributions, their work brings a great deal of awareness to Parkinson’s. Paul sets a wonderful example of how a person can have this disease, but still thrive and live a very full life.”

Northwestern’s Parkinson’s Disease and Movement Disorders Center is the only National Parkinson Foundation Center of Excellence in Illinois. The center provides innovative, multidisciplinary care, while also conducting research to extend knowledge and treatment of movement disorders. There is an emphasis on education and support for patients, families, caregivers, healthcare providers and the community. Learn more about the Parkinson's Disease and Movement Disorders Center.