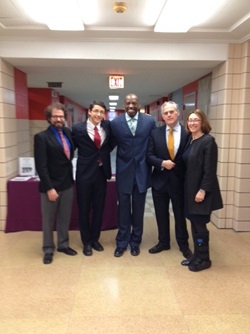 They know how important it is to read to them as they grow.

The total donation exceeded 2,000 books. It was collected not only by Prentice staff but also by Kamel’s son, Aaron, who met Pastor Neal in 2013; Walter Payton High School students and staff; Anshe Emet Synagogue members; the Women’s Group of Northwestern physicians, staff and patients; and tenants at 737 N. Michigan Ave., among others.

“What a glorious morning with Pastor Neal and the members of the Glorious Light Church,” Dr. Kamel said following the donation on Sunday, Oct. 27. “With the sun shining this morning there were plenty of rays of sunshine and hope that together we can make a better world.”

Pastor Neal started Real Men Read four years ago in one classroom at Jackie Robinson Elementary School on Chicago's South Side. His idea was to “inspire future leaders and readers” by having men in the classroom read to primary school children. The program has grown to 10 elementary schools and continues to emphasize both literacy and providing positive male role models for young students.

“When we first started out the goal was to get books into the hands of children,” said Pastor Neal. “We are an unfunded program that has grown this year because of the generosity of people like the Kamels, Anshe Emet and Prentice. We are well on our way to fulfilling our next part of the goal. This is helping us build libraries and hopefully we can get their parents and guardians to try and continue the work that their teachers do on a regular basis.”