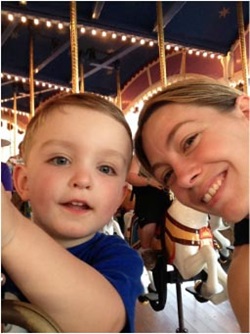 Look how far they’ve come!
More than 115 families are expected to gather from 10 a.m. to 1 p.m. Saturday, March 21 for the third reunion of the Renee Shine Crown Neonatal Intensive Care Unit at Prentice Women’s Hospital. The reunion, co-sponsored by the March of Dimes NICU Family Support Program and Northwestern Medicine, is an opportunity for NICU graduates, their families and the nurses, staff and physicians who cared for them to celebrate the big milestones achieved by Northwestern Medicine’s littlest patients.

“It’s the chance to come together with all the people who helped take care of your child and really celebrate how far they’ve come,” said Angela LoGalbo Foll, one of the organizers of the 2015 NICU reunion.

Foll’s son Vincent spent two months in the NICU in 2012. He turns 3 years old in June.

“It’s the hardest thing I’ve ever been through,” she said. “There’s really no words for how hard it is to have your little baby in the NICU just being so strong and being such a fighter. As a parent it’s kind of your worst nightmare.”

Sarah Terhune, whose son Charlie spent 76 days in the Prentice NICU between October 2012 and January 2013, said her experience at past reunions led her to help organize this year’s reunion where she will bring her train-loving, energetic son to celebrate.

“Our first reunion was fantastic,” said Terhune. “It was a great way to catch up with some of the nurses.”

Both women spoke of the impact of the “Wall of Hope,” a project created by NICU graduates and their families to show families currently in the NICU what life can be like as preemies grow. A new 2015 “Wall of Hope” will be created at the reunion from newborn pictures and pictures of the children today, and then installed in the Prentice NICU.

“We clung to the wall so much, looking for a baby that resonated with you,” said Terhune of her time with Charlie in the NICU. “It says there’s a chance, there’s hope down the road.”

The Renee Shine Crown Neonatal Intensive Care Unit at Prentice Women’s Hospital was the first NICU in Illinois to offer the March of Dimes NICU Family Support Program. The program is built on a philosophy of family-centered care and supports families throughout the hospitalization, during the transition to home and in the event of a newborn death.

Learn more information about the reunion.