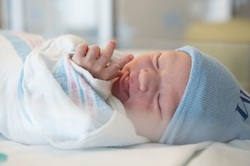 One of Chicago’s newest residents didn’t make it quite in time for a midnight kiss, but he got plenty of love 23 minutes later.

Alexander is the first child of Kara and Kevin Lazroff, who live on Chicago’s North Side. He was the first baby born in 2014 at Prentice.

“He came at 39 weeks exactly and we couldn’t be happier,” said new mom Kara. “Now we will have two things to celebrate – the new year and our son’s birthday – every year on January 1.”

While throughout Chicago revelers were ringing in the new year with champagne toasts and dancing, doctors, nurses and staff at Prentice Women’s Hospital were also on their feet. More than two dozen babies, including two sets of twins, were delivered on the busy overnight shift at Prentice that rang in 2014.

“This is definitely one New Year’s Eve we will never forget,” Kevin said.

“Any day a new baby is born is a special day,” she said. “We look forward to many more happy deliveries at Prentice in 2014.”