Removing the Rust: My Journey with Cancer 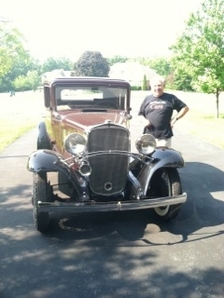 Paul Orednick, a 72-year-old who was diagnosed with a rare form of blood cancer six months ago, has agreed to share his inspiring story. Below is Paul’s journey in his own words.
Almost six months ago, I was diagnosed with a very rare form of blood cancer called blastic plasmacytoid dendritic cell neoplasm. The first doctor I consulted told me this cancer was so rare that only 200 people have ever had this diagnosis. I had just turned 72 and was informed that I had less than a year to live without a peripheral blood stem cell transplant. I was devastated after she explained they don’t normally perform this type of procedure on people who were my age.

I sought a second opinion after hearing that, which led me to Dr. Olga Frankfurt, hematologist/oncologist at Northwestern Memorial Hospital and member of the Robert H. Lurie Comprehensive Cancer Center of Northwestern University. After an evaluation of all of my tests, she said to me, “We can do this.” She stated that chronological age is not the most important thing. She also looks at physiology and I am extremely healthy for my age. This was the answer to our prayers!

My family and I started on a journey to beat this and I have never looked back. Over the course of the last few months, I have often times compared my battle with the restoration of my 1932 Chevy Five Window Coupe. I purchased this car as a "bucket of rust" nine years ago and can draw so many parallels to the process that the oncology department at Northwestern did to restore me.  Rust on a car is often called "cancer" and what I did with my car helped me to understand what Dr. Frankfurt and her team were going to do for me.

Just as I had to remove the rust or “cancerous” portions of my car and strip it down to its basic frame, I realized that my medical team and chemotherapy was going to do the same to me. In time, my car was reduced to a bare bones frame and I began building it back to its restored form.  Similarly after chemo removed my cancer and emptied my bone marrow to receive my donor’s cells – my restoration began. On March 21, 2012 (my new birthday), my anonymous female donor’s stem cells were infused in a process similar to a blood transfusion. We gave my donor the nickname of “Hope” as her generosity certainly gave me hope.  I was on my way to recovery and restoration.

Thinking about my cancer in this way encouraged me and I began to show my car photos and tell my story to my doctors, nurses and those involved with my care. I had confidence that they could do for me what I did for my 1932 Chevy.  I made sure that I reminded them, however, that they did not have nine years to complete their work!

I am now at day 97 post-transplant and doing very well. I still have a long road ahead and look forward to each day that I have been given.  I am very grateful for Dr. Frankfurt, the Northwestern stem cell transplant team, the wonderful staff on Prentice 15 and 16, and of course my very generous donor for giving me this opportunity for life. I am also extremely grateful to God for the peace we have had through this journey.   The love, prayers  and support of my wife, family and friends has been priceless.

I look forward to the day when I can personally thank “Hope” for being a stem cell donor and perhaps take her for a ride in the rumble seat of my 1932 Chevy.