In this month’s “Research Roundup” series, Northwestern Medicine® scientists are using their research to examine and come up with creative solutions to complex healthcare questions. Read on to learn about how scientists are exploring creative options to fertility preservation in young cancer patients, how patterns in our blood that may detect and predict cancer in the future and the role of white brain matter plays in traumatic brain injury.

Blood Telomere Changes Can Predict, and May Help Prevent Cancer in the Future

A new Northwestern Medicine study shows a distinct pattern in the changing length of blood telomeres, the protective end caps on our DNA strands, can predict cancer many years before actual diagnosis.

The pattern – a rapid shortening followed by a stabilization three or four years before cancer is diagnosed – could ultimately yield a new biomarker to predict cancer development with a blood test. This is the first reported trajectory of telomere changes over the years in people developing cancer.

In the new study, scientists took multiple measurements of telomeres over a 13-year period in 792 people, 135 of whom were eventually diagnosed with different types of cancer, including leukemia, prostate, skin and lung cancers, among others.

Initially, scientists discovered telomeres aged much faster (indicated by a more rapid loss of length) in individuals who were developing but who had not yet been diagnosed with cancer. Telomeres in persons developing cancer looked as much as 15 years older, chronologically, than those of people who did not go on to develop the disease.

“Understanding this pattern of telomere growth may mean it can be a predictive biomarker for cancer,” said Lifang Hou, MD, PhD, the lead study author and associate professor in Preventive Medicine-Cancer Epidemiology and Prevention. “Because we saw a strong relationship in the pattern across a wide variety of cancers, with the right testing these procedures could be used to eventually diagnose a wide variety of cancers.” Hou also is a member of the Robert H. Lurie Comprehensive Cancer Center of Northwestern University. 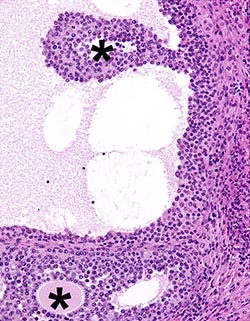 Until recently, the ability to preserve fertility in childhood cancer survivors was often not possible. But thanks to new research on the creation and transplantation of an artificial ovarian system, young cancer patients may have new hope.

Through a process called decellularization, the cells inside tissue are removed, leaving behind its structure, a scaffold-like matrix can that then be recellularized with new cells. Using this process, Northwestern Medicine scientists have successfully created and transplanted an artificial ovarian system that induced puberty in mouse models.

Another option for maintaining fertility involves removing a portion of the ovaries before cancer treatment and then transplanting the preserved tissue back into the patient’s remaining ovarian tissue after treatment. This method has been successful, but there is a risk that transplanting a patient’s original tissue could reintroduce cancer cells.

“We knew that transplantation was a promising possibility, but we didn’t want to use the patient’s own tissue,” said first author, Monica Laronda, ’11 PhD, a postdoctoral fellow in the lab of Teresa Woodruff, PhD. “So we looked into regenerative medicine technologies being used in other systems, which led us to decellularization.” 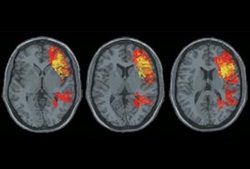 Many studies have shown that injury to gray matter, the areas of the brain that contain nerve cell bodies, can cause long-lasting cognitive disability. But the role of white matter has rarely been explored. In a new study, Northwestern Medicine scientists reveal that white matter loss is associated with impaired verbal abilities in brain injury patients. The study’s findings demonstrate that mapping white matter loss may indicate how much cognitive function a patient can recover after brain damage. “This study offers a critical insight into the role of cortical disconnection as an important factor affecting cognitive recovery in brain injury patients,” said first author Irene Cristofori, PhD, a postdoctoral fellow in the lab of senior author Jordan Grafman, PhD, professor in Physical Medicine and Rehabilitation, Neurology and Psychiatry and Behavioral Sciences. “The loss of white matter can prove to be a reliable or even a superior predictor of recovery, most notably for cognitive functions involving a widespread brain network, such as those required to produce words properly.”

Learn more about the Feinberg School of Medicine.