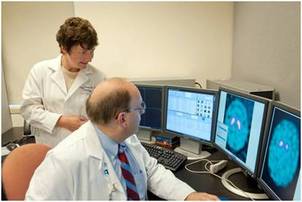 Nearly 1.5 million Americans have Parkinson’s disease; with another 50,000 to 60,000 cases diagnosed each year. Parkinson’s is a neurological disease that progresses over time, yet there is currently no definitive diagnosis or cure.  In hopes of advancing research, individuals from across the country are volunteering to help scientists gather information that may allow them to better understand the disease. They are participating in the landmark Parkinson’s Progression Markers Initiative (PPMI) study, which seeks to identify biomarkers, or objectively measureable characteristics, for Parkinson’s. Northwestern’s Parkinson’s Disease and Movement Disorders Center is the only enrollment site in Illinois for the $40 million, five-year study.

Launched in September 2010, PPMI has 163 participants to-date at 22 sites across the United States and Europe. Northwestern has enrolled 20 participants, making it one of the top enrollment sites, and continues to seek both people with and without Parkinson’s for participation. Funded by the Michael J. Fox Foundation, PPMI seeks to enroll 400 people with Parkinson’s and 200 people who do not have the disease over five years. To be considered for enrollment, people with Parkinson’s must be at least 30 years old and have not begun taking medication or have taken it for less than 60 days.

For information about the PPMI study or to inquire about enrollment, call 312.503.5645.