Share on Facebook Share on Twitter Share through Email Print
The recent news revealing musician Huey Lewis’s struggles with Ménière’s disease has shined a spotlight on the neurological disorder. The symptoms, which include unpredictable bouts of dizziness, hearing loss and ringing in the ears, may get progressively worse over time and can greatly interfere with work, driving and daily activities.

60-year-old Nancy Jackson, of Aurora, Ill., first experienced the symptoms of Ménière’s disease about eight years ago. Initially, the incidents would only happen a few times a year, but the vertigo was extreme and accompanied by nausea and vomiting.

“It would knock me out for the whole day,” said Jackson. “The room would spin and the only way to stop it was to close my eyes and lie down.”

At first she attributed the symptoms to allergies, but as they became more frequent, sometimes happening almost every day, she sought out medical advice.

According to Andrew Fishman, MD, director of neurotology and cranial base surgery at Northwestern Medicine Central DuPage Hospital, the exact cause of Ménière’s disease is unknown, however, it is believed to be related to pressure and fluid in the inner ear.

“The inner ear membranes swell and pop causing the fluids to mix-up and the signal for balance to go haywire,” said Dr. Fishman. “It typically occurs only in one ear and patients often describe a ringing and feeling of fullness in the ear and progressive hearing loss.”

For some patients, like George Janke of Batavia, the symptoms also include severe migraines and balance problems.

“I first thought it was just an ear infection, but it just kept getting worse,” said Janke. “When the anti-migraine medicine didn’t work, I decided it was time for vestibular surgery.”

To confirm the balance disorder is a vestibular (inner ear) disorder, one of the tools Northwestern Medicine Central DuPage Hospital uses is rotational chair testing. During testing, a chair slowly rotates as an examiner measures the patient’s ability to reflexively visually track an object.

“The inner ear is essentially a gyroscope that helps steer the eyes while the head is moving,” said Dr. Fishman. “If you have a problem with the vestibular nerve, the eyes won’t move correctly.”

The first line of treatment is reducing daily salt intake and prescribing an oral diuretic to reduce the pressure in the ear. According to Dr. Fishman approximately 80 percent of patients with Ménière’s disease can control symptoms by switching to a low sodium diet.

For the 20 percent who don’t respond, treatment may include vestibular physical therapy or injecting corticosteroids and other chemotherapies into the tympanum, or middle ear, through the ear drum. If the symptoms are severe and persistent, surgery may be an option.

Jackson and Janke opted to undergo a vestibular nerve section. The procedure involved cutting the nerve that connects balance and movement sensors in the inner ear to the brain. Both also had bone anchored hearing aid implant surgery to rehabilitate the associated hearing loss in the impacted ear.

While the vertigo attacks have completely been cured, Jackson and Janke initially continued to experience some balance problems. With the help of physical therapy, they have learned to adapt and can once again enjoy full lives. Janke is thrilled to be driving again and Jackson is looking forward to teaching crochet to middle school students at summer camp.

“I have my life back. I no longer have to live in fear that the dizziness will strike,” said Jackson.

Ménière’s disease typically starts between the ages of 20 and 50 years. The National Institute on Deafness and Other Communication Disorders (NIDCD) estimates that approximately 615,000 individuals in the United States are currently diagnosed with Ménière’s disease and that 45,500 cases are newly diagnosed each year. 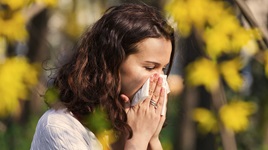 Allergies, Asthma and COVID-19: How to Differentiate Symptoms 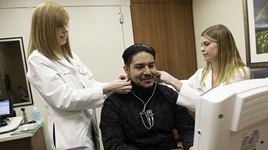